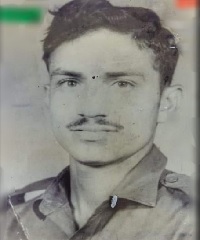 Nb Sub Hem Raj Sharma joined the army after completing his initial school education. He was recruited into 8 JAK LI battalion of the J & K Light Infantry Regiment, an infantry Regiment with a long history of gallantry in numerous battles. By the year 1987, he had served in various operational areas and had been promoted to the rank of Naib Subedar. During early part of 1987, Nb Sub Hem Raj got posted to Siachen area, one of the toughest battle fields in the world. By that time, had evolved into a tough soldier and committed Junior Commissioned Officer, capable of handling challenging assignments.

During May 1987, Nb Sub Hem Raj Sharma's unit was deployed at the Siachen Glacier. After the end of the first Indo-Pak War of 1947-48, a Cease Fire Line (CFL) was established from Manawar in Jammu to Khor (NJ9842) in Ladakh, just short of the Karakoram glaciers. No precise line was extended beyond this and under the Shimla Agreement of 1972, the CFL was redefined and named as the Line of Control (LoC). After provocative actions by Pakistan in the Siachen area, India captured the area in 1984 during Operation Meghdoot. Later, Pakistan launched an assault in the area, gaining control of the highest peak in the area, located to the south of Bilafond La. In April 1986, the Pakistanis established a military post on the peak and re-named the peak as “Quaid Post”. The Quaid Post was located at an altitude of 22,153 feet and was extremely difficult to attack, as it was surrounded by 457 m high ice walls. It had an inclination of 80° to 85° on three sides, and a little less on the fourth side. It was very difficult for the Indian soldiers to climb up the peak without getting noticed by the Pakistani soldiers stationed at the top.

In a provocative action, on 18 April 1987, the Pakistani troops at Quaid Post fired on the Indian soldiers at Sonam, killing two of them. The Indian Army then decided to launch an operation to occupy the Quaid Post. The 8th Battalion of the Jammu and Kashmir Light Infantry (8th JAK LI) was given the task of capturing the Quaid Post. As part of preparation of launching an attack on the Quaid post, it was decided to send a recce mission to identify the best possible route to the peak. 2nd Lt Rajiv Pandey was tasked to lead the mission with eight other soldiers including Nb Sub Hem Raj. On 29 May 1987, as planned Nb Sub Hem Raj and his comrades swung into action and commenced their arduous task in hostile weather conditions. The task involved negotiating a stretch of 3 kilometers in the open on the glacier face and thereafter a climb of a near vertical ice wall of 12000 feet.

Nb Sub Hem Raj along with his comrades crawled inch by inch and crossed the impassable ice ridge within 30 meters of the peak. The assigned task was to identify the best approach route to the Post, and mark it with ropes. Nb Sub Hem Raj and his team despite facing challenging conditions, managed to establish a number of footholds on the vertical ice wall and had laid a rope to the top. However, Nb Sub Hem Raj and his team were detected by the Pakistani soldiers, when it was just 30 m from the top. The Pakistanis opened fire with a heavy machine gun, with many soldiers taking direct hits. Nb Sub Hem Raj and five other soldiers, got mortally wounded and were martyred. Besides Nb Sub Hem Raj, the other martyred soldiers included their team leader 2nd Lt Rajiv Pandey, Havildar Mulkhraj Sharma, Naik Kuldeep Singh, Rifleman Girdhari Lal and Rifleman Kashmiri Lal.  Nb Sub Hem Raj displayed commendable courage and devotion to duty during the assigned mission and laid down his life in the service of the nation.