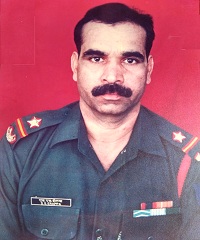 Naib Subedar Earappa SS was born on 1st June 1960 in Somvarpet taluk of Coorg district in Karnataka. Since his childhood, Nb Sub Earappa had inclination to join the Armed Forces as he was fascinated with the Army life. After completing his schooling he joined the Army at the age of 19 years on 12 June 1979. He was recruited into 12 Madras of the Madras Regiment, an infantry Regiment known for its intrepid soldiers and various battle exploits.

By the year 2000, Nb Sub Earappa had put in around 20 years of service and had the experience of serving in different operational areas. During his service, he was posted to various places like Assam, Gujarat ,Lucknow, Jammu & kashmir ,Nagaland ,Calcutta , Sikkim and Sri  Lanka. In the year between 1984 to 1985 he had taken part in Operation Savage (Sikkim), in 1987 Operation Pawan (Sri Lanka) and in December 1988, Op Rakshak.

During his long service in the Army Naib Subedar Earappa had earned the following medals:

During 2000, Nb Sub Earappa’s unit was deployed in Assam as part of Op Rhino. In Jan 2000, Nb Sub Earappa was tasked for a train escort duty, as the train route passed through the insurgency prone area. While the train was moving from Kamakya to Lakhimpur Railway station, Nb Sub Earappa accidentally fell off the running train and lost his life. The precious life of a dedicated and valiant soldier was lost in this horrific accident. Nb Sub Earappa was a committed junior commissioned officer, who was respected for his soldierly skills and devotion to duty.

Naib Subedar Earappa SS, though in a tragic way, lost his life in the line of his duty and is survived by his wife Pushpa Erappa, daughter Ranju E and son Manoj E.