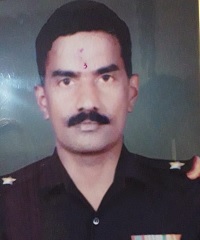 Naib Subedar Babu Astekar was born on 01 Aug 1969 and hailed from Chandgad in Kolhapur district of Maharashtra. Son of Shri Lakshman and Smt Bhagyarathi, Nb Sub Babu Astekar was fourth among 5 siblings. He did his earlier education in his hometown and after completing his PUC II year  joined the Indian Army  in the year 1976 at the age of 17 years. He was recruited into 9 MLI battalion of the famed Maratha Light Infantry Regiment, an Infantry regiment  known for its courageous soldiers and various battle and theater honours.

After serving for sometime, he got married to Ms Bebi in the year 1995 and the couple had daughter Sushmitha, and son Pratik. By the year 2008, he had been promoted to the rank of Naib Subedar and had developed into a battle-hardened soldier and a very dependable junior commissioned officer. He had served in various operational areas by then and gathered substantial field experience.

During 2008, Nb Sub Babu Astekar was serving with 9 MLI Bn deployed in J&K. The AOR (Area Of Responsibility) of the Battalion ran along the LOC which was also prone to infiltration from across the border. Besides undertaking planned counter-insurgency and counter-infiltration operations, the unit launched regular armed patrols to monitor its area. Nb Sub Babu Astekar was part of one such patrol on 10th Jan 2008. The designated route of the patrol passed through the rugged area and was also prone to avalanches. As the patrol was traversing through the assigned route, it was struck by a horrific avalanche.

Naib Subedar Babu Astekar is survived by his wife Smt Bebi Babu Ashtekar, daughter Sushmitha, and son Pratik. Smt Bebi had a  paralytic attack after her husband’s death and is unable to talk & walk properly even today. Currently, the family is residing in Belgavi district of Karnataka.