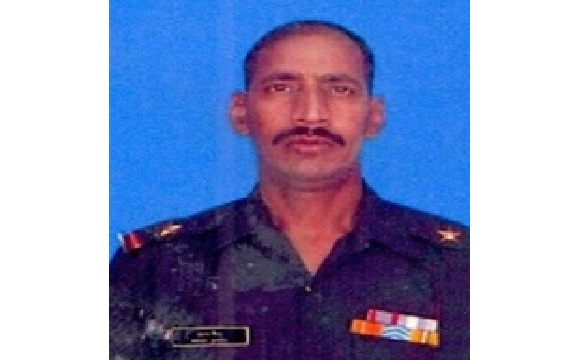 Naib Subedar Aram Singh Gurjar hailed from Bilai village in Karauli district of Rajasthan and was born on 08 July 1974. He got selected to join the Army after completing his initial education. He was recruited into 18 Mahar battalion of the Mahar Regiment, an infantry Regiment well known for its dauntless soldiers and numerous battle exploits. Besides being an outstanding soldier, he was a keen sportsman too and always ready for action.

After serving for some time, he got married to Ms Bimlesh and the couple was blessed with three sons Manish, Sanjay, and Avadhesh, and two daughters Rajkumari and Smita. After serving for few years with his parent unit, he was deputed to serve with 51 RR unit, deployed in J & K for counter-insurgency operations.

During Jan 2017, Naib Subedar Aram Singh Gurjar's unit was deployed in the Gurez sector of North Kashmir along the LOC. The AOR(Area of Responsibility) of the unit spanned over remote rugged mountainous terrain with extreme weather conditions, especially in the winter season. The troops were deployed on various forward posts and often undertook patrol to monitor the area in between the manned posts. Also, heavy snowfall often blocked the roads and hampered the movement of troops which necessitated frequent clearance operations. On 25 Jan 2017, a horrific avalanche struck 51 RR battalion Army camp, which took Nb Sub Aram Singh Gurjar and many of his comrades off guard. The avalanche hit the post at Neeru village located in the Tulail area, 25 km away from Gurez town in North Kashmir. The place located along the LOC normally remained cut off by road in winter. The avalanche hit the area a few hundred meters away from the HQs of 51 RR unit and trapped the soldiers, who were on patrol.

The soldiers invariably faced extreme risks in manning the inhospitable terrain under extreme weather conditions. Avalanches usually took place due to the accumulation of snow and were triggered by morning sunlight. In other cases, when the slope of accumulated snow was between 60 to 80 degrees, the instability led to an avalanche. Although the Army had a unit of the Snow Avalanche Study Establishment (SASE) in Jammu and Kashmir, with several observatories at various locations to issue warnings and alerts to the Army formations and units, it could not detect this avalanche. The magnitude and suddenness of the avalanche did not give any time to Nb Sub Aram Singh Gurjar and other soldiers of the 51 RR battalion to take any defensive measures.  As a result, the soldiers got buried under tons of snow and it was very difficult to locate them.