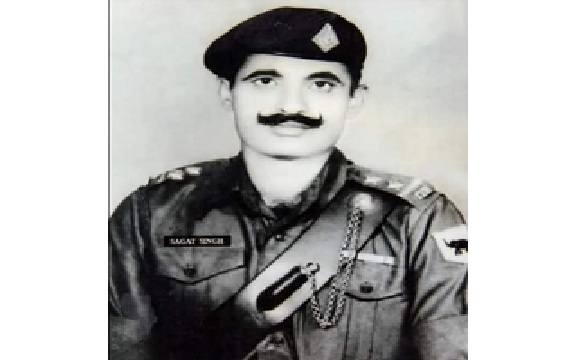 Risaldar Sagat Singh hailed from Belwa Ranaji (now Sagat Nagar) in Jodhpur district of Rajasthan and was born on 10 Aug 1935. Son of an army veteran Sowar Simrat Singh, he was inspired by his father and always nursed the idea of serving in the Army like him since his childhood. Eventually he joined the Army in the year 1950 at the age of 15 years. He was recruited into the 17 Poona Horse, a tank regiment of the Armoured Corps, the important combat arm of Indian Army.

After completing his training, he served in various operational areas and developed into a fine soldier with admirable leadership skills. By 1971, he had been promoted to the rank of Risaldar and had put in over 20 years of service. By then, he had developed into a committed soldier and dependable Junior Commissioned officer, who could handle important operational assignments.

During the Indo-Pak War of 1971, Risaldar Sagat Singh's unit 17 Poona Horse was assigned to the command of the 47th Infantry Brigade, deployed in the Shakargarh sector. The Brigade had to establish a bridgehead across the River Basantar. On 15th December, the Brigade had captured its objective, although, it was filled with extensive mines by the enemy, preventing the deployment of tanks of Poona Horse. It was a joint operation by 17 Horse, 4 Horse (Two armoured Regiments), 16 Madras and 3 Grenadiers. The engineers had cleared the mines halfway when the Indian troops noticed the alarming activity of the enemy armour asking for air support.  At this critical juncture, the 17 Poona Horse decided to push through the minefield. On 16 December, Pakistani armour launched the first of their counter-attacks under the cover of a smokescreen at Jarpal, targeting the ‘B’ Squadron. The commander of the squadron urgently called for reinforcements.

The elements of 'A" Squadron, led by 2nd Lt Arun Khetarpal who was the troop leader, rushed to meet the Pakistani armour and launched a ferocious counterattack. Risaldar Sagat Singh, who was the tank commander of tank number JX218 was also the Troop JCO(Junior Commissioned Officer) of 2nd Lt Arun Khetarpal's troop. Ris Sagat Singh was an experienced Tank Commander, well respected by his unit mates for his professional competence and leadership skills. In the ensuing counter attack, Ris Sagat Singh displaying raw courage was able to subdue the enemy's advance with his tanks successfully. However during the fierce battle, Ris Sagat Singh received Machine Gun burst in his chest an face and was grievously injured. Despite being seriously wounded, he ordered his soldiers to leave him and rush to support his troop commander 2nd Lt Arun Khetarpal in the ongoing battle. He soon succumbed to his injuries and was martyred. Ris Sagat Singh was a fearless and committed junior commissioned officer, who led from the front and laid down his life in the line of his duty.

Risaldar Sagar Singh was awarded "Mention-in- Dispatches" (MD) for his for his commendable gallantry, devotion to duty, camaraderie and supreme sacrifice.