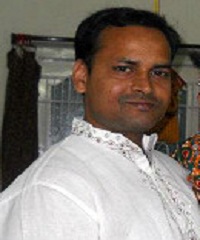 Mech (R) II Dasari Prasad (33) belonged to Gopalapatnam in Visakhapatnam district of Andhra Pradesh. Mech(R) II  Prasad was trained to work in the solar department of submarines, and had earlier worked in INS Sindhu Dhwaj before being transferred to Mumbai .

Mech(R) II Prasad was married and had one daughter.His wife was pregnant with the second child and was supposed to deliver on August 18, when he lost his life in the horrific accident on INS Sindhurakshak on 14 Aug 2013.

On 14 Aug 2013, Mech(R) II Dasari Prasad was onboard INS Sindhurakshak, the 3000-tonne Kilo class submarine, powered by a combination of diesel generators and electric batteries. On that day, the submarine at Naval dockyard in Mumbai was rocked by a series of explosions and started sinking along with 18 crew members with 3 officers and 15 sailors.