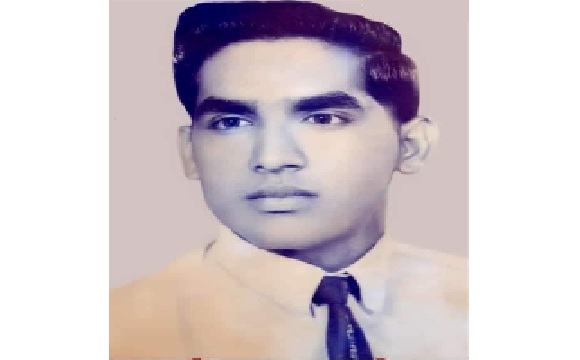 ME I Hukma Ram Jat hailed from Dungari village of Sambhar tehsil in Jaipur district of Rajasthan and was born on 01st Jan 1949. Son of Shri Mangu Ram and Smt Kani Devi, he had Shri Ramkaran and Shri Sardar Jeetarwal as his younger brothers. Besides two brothers, he had three sisters as well, as his siblings. After completing his schooling he joined the Indian Navy on 18 Oct 1968 at the age of 18 years. After serving for nearly two years, he got promoted to the rank of ME I on 28 Dec 1970.

During Dec 1971 ME I Hukma Ram Jat was serving aboard INS Khukri. When the Indo-Pak War of 1971 broke out, the anti submarine frigates of the Navy, INS Khukri and INS Kirpan were given the responsibility of hunting and neutralizing enemy submarines in the North Arabian Sea. The Indian Naval radio detection equipment identified a submarine in the vicinity of Diu harbour on 03rd Dec 1971.  Following this, INS Khukri along with two other ships INS Kirpan and INS Kuthar were dispatched to take on the threat of the enemy submarine.

In the late evening of 9th December, INS Khukri was attacked by the Pakistani submarine PNS Hangoor which fired torpedoes at it, causing devastating damage. The Captain of the ship, Capt Mulla evaluated the situation within minutes and issued orders for its abandonment. There were two massive explosions inside the Khukri and the ship went dark. It lost all power and began to tilt steeply to its right (Starboard) as chaos followed the order of ‘abandon ship’. Within a short span of time,  the ship was hit by another torpedo. As the damage to the ship was extensive, a large number of officers and sailors did not get adequate time to follow the orders of their captain. Eventually the ship went down along with 18 officers and 176 sailors. ME I Hukma Ram Jat was one of the brave-hearts who laid down his life at the age of 22 years in the line of his duty. ME I Hukma Ram Jat was a valiant soldier and committed sailor, who made the supreme sacrifice following the highest traditions of Indian Navy.

ME I Hukma Ram Jat is survived by his brothers Shri Ramkaran & Shri Sardar Jeetarwal and three sisters.

A Rugby tournament "Shaheed Memorial Rugby Cup" for the youth is organized in Jaipur regularly in the honour of ME I Hukma Ram Jat.