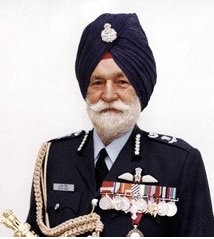 Last Rank: Marshal of the IAF

Marshal of the IAF Arjan Singh was born on April 15, 1919, in a military family in Lyallpur in Punjab of undivided India. His father, grandfather and great grandfather too had served in the Army. Patriotism ran in his family as his father was a Lance Daffadar in the Hodson’s Horse at the time of his birth, and retired as a full Risaldar of the Cavalry. His grandfather Risaldar Major Hukam Singh and great-grandfather, Naib Risaldar Sultana Singh had also served in Army.

MIAF Arjan Singh was selected to the Empire Pilot training course at RAF Cranwell when he was 19 years old. His first assignment on being commissioned was to fly Westland Wapiti biplanes in the North-Western Frontier Province as a member of the No.1 Royal Indian Air Force Squadron. He was promoted to the rank of Squadron Leader in 1944 and led the squadron against the Japanese during the Arakan Campaign — flying close air support missions during the crucial Imphal Campaign and later assisting the advance of the Allied Forces to Rangoon.
For his role in successfully leading the squadron in combat, then Sqn Ldr Arjan Singh was awarded the Distinguished Flying Cross (DFC) in 1944.  After his promotion to the rank of a Wing Commander, he attended the Royal Staff College in Britain. Immediately after Independence, he commanded Ambala Air Force Station in the rank of Group Captain. In 1949, he was promoted to Air Commodore and took over as Air Officer Commanding of an operational command that later came to be known as Western Air Command.
Then Air Cmde Arjan Singh had the distinction of having the longest tenure as the AOC of an Operational base, initially from 1949-1952 and then again from 1957-1961. After his promotion to Air Vice Marshal, he was appointed as the AOC-in-C of an Operational Command. Towards the end of the 1962 war, he was appointed as the Deputy Chief of Air Staff and became the Vice Chief in 1963.
On August 1, 1964, in the rank of Air Marshal, he took the reins of the IAF at a time when the force was still rebuilding itself and was gearing up to meet new challenges. Marshal of the IAF Arjan Singh was a WWII hero and won our nation’s gratitude for his military leadership in 1965 war. He led a young Air Force into the war against Pakistan in 1965 when he was 45. With careful planning, unmatched insight and wisdom, Arjan Singh, out-foxed Pakistan Air Force which had top of line US jets as against India’s old Gnats and Vampire fighters. After a few initial setbacks, the Indian Air Force outmaneuvered the Pakistani fighters, handing a decisive air superiority to the Indian war effort. He remained the IAF chief from August 1, 1964, to July 15, 1969. He was the first Indian Air Chief to be elevated to the rank of Air Chief Marshal on January 16, 1966. He retired from the service in 1970 after a glorious service career at the age of 50.

After his retirement from the air force, MIAF Arjan Singh was appointed as India’s Ambassador to Switzerland in 1971 and concurrently served as the Ambassador to the Vatican. He was also the High Commissioner to Kenya in 1974.  He served as a member of the National Commission for Minorities and was also the Lieutenant Governor of Delhi.  In recognition of his lifelong services, the government conferred the rank of the “Marshal of the Indian Air Force” on Arjan Singh on January 28, 2002, making him the first and the only ‘Five Star’ rank officer with the Indian Air Force.

MIAF Arjan Singh left for his heavenly abode on 16 Sep 2017 at the age of 98, owing to natural causes. MIAF Arjan Singh will go down in the military history of India as one of the greatest soldiers and will continue to inspire future generations.

On 14 April 2016 at an event to mark the Marshal’s 97th birthday, the then Chief of Air Staff Air Chief Marshal Arup Raha announced that Indian Air Force base at Panagarh in West Bengal would be named after MIAF Arjan Singh in his honor and would be called Air Force Station Arjan Singh.

Honourpoint Foundation takes utmost precaution towards factual correctness of the uploaded data and makes sure that the data is from a credible source. However, we do not take responsibility for authenticity of the content and Honourpoint.in or any of its members cannot be held responsible for any misappropriation of the uploaded content.