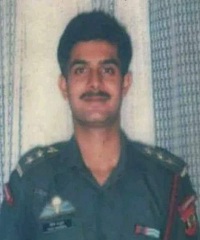 Major Vivek Singh Bhandral hailed from Himachal Pradesh and was born on 16th  January 1970. He joined the army and was commissioned into the Parachute Regiment, the elite regiment of Indian army well known for its dare devil operations. Later he joined 21 Para (SF) battalion, one of the 9 Para (SF) battalions comprising the highly trained commandos.

During 2002, Major Vivek Singh Bhandral’s unit was deployed in J&K for counter-insurgency operations. On 29 August 2002, a search operation led by Maj Vivek Singh Bhandral was launched. Major Vivek  was tasked for the operation, based on the information received from the intelligence sources about the presence of terrorists in a village in Kupwara district. The team as planned reached the suspected area and launched a search and cordon operation. As the operation was under way at around 1200 hours, two terrorists charged out from a house firing indiscriminately at the troops in an attempt to break the cordon and flee. In a swift response, Major Vivek swung into action and shot dead one terrorist.

In the meantime, the second terrorist jumped into a grove and started firing back at Major Vivek. Displaying commendable courage and field-craft skills Major Vivek took on the second terrorist too and lobbed a grenade. However while closing in, a machine gun burst injured Major Vivek severely. But despite his injury and incessant bleeding, Major Vivek in a show of rare grit and determination leaped forward and eliminated the second terrorist. However Major Vivek later succumbed to his injuries and was martyred. Major Vivek was a gallant soldier and a committed officer who led from the front like a good military leader. He was given the gallantry award ” Sena Medal ” for his outstanding courage, leadership, camaraderie and supreme sacrifice.