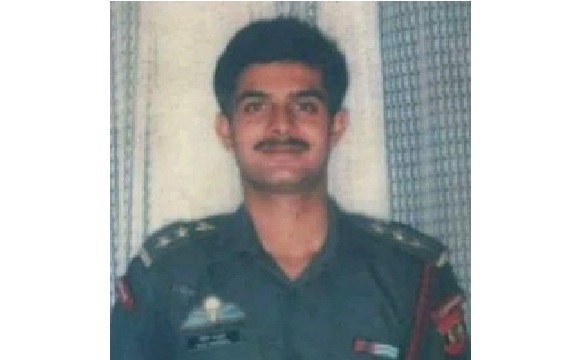 Major Vivek Singh Bhandral hailed from Kangra in Himachal Pradesh, but was born in a Military Hospital in Hyderabad on 16th  June 1970. Son of Col Pritam Singh Bhandral(Retd) and Smt Rajkumari Bhandral, Maj Vivek had a brother Vikram as his sibling. He did his initial schooling from Kangra in Himachal Pradesh and then studied from various schools in Belgaum, Jalandhar, Assam and Udhampur.  Maj Vivek always wished to follow in the footsteps of his father and don military uniform. His father Col Pritam Singh Bhandral belonged to the Maratha Light Infantry Regiment of Indian Army and retired after serving for over three decades. Though Maj Vivek became a Commerce graduate, he continued to follow his passion and eventually got selected to join the Army through Combined Defence Services Examination.

He joined the prestigious IMA Dehradun in July 1991 and passed out as a Lieutenant on 19 Dec 1992. He was commissioned into 9 MLI battalion of the Maratha Light Infantry Regiment, well known for its dauntless soldiers and numerous battle exploits. After joining his unit, he soon made a mark with his superior physical capabilities and soldierly skills. He was a soldier at heart and loved an adventurous life, so decided to volunteer for Special Forces.  After the grueling selection process and training, he was inducted into the elite 21 Para (SF) battalion in 1995. The soldiers of 21 Para(SF) were known for their gallantry and daredevil commando operations in very challenging situations. In Feb 1996, he got married to Ms Shalini Jamwal and the couple had a daughter Aarushi.

Besides the Commando course, he also underwent the Young Officers’ course and the Signals’ course. A qualified combat free faller, he also qualified to be an instructor at the All Arms Wing, Military College of Telecommunication Engineering(MCTE), Mhow. Before being posted to J&K in 2002, Maj Vivek served in Assam as part of "Op Rhino" and also participated in "Op Vijay" during the Kargil war. He undertook various operations as Special Forces Team Leader during "Op Vijay" and proved his mettle as a gritty soldier. He was awarded the Army Chief’s Commendation card during this period for his commendable leadership and devotion to duty.

During 2002, Maj Vivek Singh Bhandral’s unit 21 Para(SF) was deployed in J&K for counter-insurgency operations as part of "Op Parakram". On 29 Aug 2002, the security forces had received information from the intelligence sources about the presence of militants in the hideouts of the jungles of Machal sector of Kupwara district. It was decided to launch a search and destroy operation to nab the hardcore militants and the task was assigned to 21 Para(SF) unit. Maj Vivek Singh was chosen to lead the operation along with his troops. Maj Vivek Singh swung into action and launched the operation on 29 Aug 2002.  As the operation was under way at around 1200 hours, two terrorists charged out from a house firing indiscriminately at the troops in an attempt to break the cordon and flee.  During the exchange of fire, the leading scout and the squad commander got injured and needed to be moved to a safer place.

In a swift response, Major Vivek swung into action and shot dead one terrorist. In the meantime, the second terrorist jumped into a grove and started firing back at Major Vivek. Displaying commendable courage and field-craft skills Major Vivek took on the second terrorist too and lobbed a grenade. However while closing in, a machine gun burst injured Major Vivek severely. But despite his injury and incessant bleeding, Major Vivek in a show of rare grit and determination leaped forward and eliminated the second terrorist too. However Major Vivek later succumbed to his injuries and was martyred. Major Vivek was a gallant soldier and a committed officer who led from the front like a good military leader. He was given the gallantry award ” Sena Medal ” for his outstanding courage, leadership, camaraderie and supreme sacrifice.