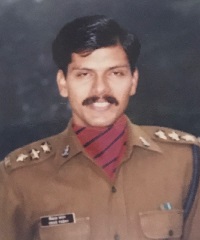 Major Vikas Yadav hailed from Haryana and was born on 29th March 1961. Son of Shri Maha Singh Yadav and Smt Shakuntla Yadav, Maj Vikas completed his schooling from Gurgaon and graduated from Government College, Gurgaon. Maj Vikas had a passion for Armed Forces and pursued his dream to join OTA in 1981. Major Vikas belonged to SS 34 Course from OTS, Madras (now OTA, Chennai) and got commissioned on 26th August, 1982 in the rank of Second Lieutenant.

Maj Vikas got commissioned into 7 Jat of the famed Jat Regiment of Army and was always very proud of his regiment. He underwent numerous training courses in his service career like YO’s course, Battalion Support Weapon course etc and evolved into a dedicated and committed soldier. He was an officer par excellence and a thorough gentleman and that was the reason, he was loved by the troops under his command and equally well admired by his superior officers.

During 1996, Maj Vikas’s unit was deployed in J & K area and was engaged in counterinsurgency operations. During a standoff with militants in the famous Charare-Sharif mosque in Kashmir, Maj Vikas along with his Company displayed exemplary courage and tactics and pounced on the militants hidden in the mosque. After this incident, the militants acknowledged him as a ‘Tiger’ of the Indian Army and placed his name on their ‘Hit List’. This was revealed in several messages flashed to the militant’s high command, intercepted by the armed forces.

On 09 June 1996, Maj Vikas was tasked with a search and destroy mission after getting specific intelligence reports about the presence of militants in the area of responsibility of his unit. Maj Vikas swung into action along with his troops and set out to implement his daredevil action plan. However, Maj Vikas got injured in the fierce gun-battle and later succumbed to his injuries. Maj Vikas Yadav attained martyrdom while leading from the front like a true military leader without fearing for his life. He was born brave and quite capable of leading his men by example with tremendous dedication and zeal. He was always fearless and the first at any scene of action like a true soldier.

Apoorva Yadav, Daughter of Major Vikas Yadav, paid tribute to her father on his “Day of Martyrdom” on 09 Jun 2018…..

29th Mar and 9th June which happen to be the days that my father was born and the day he attained martyrdom have special significance for our family. We also strive to keep his name alive in the society by ensuring that these days are remembered not just within the family but with society at large (mostly through charity events).

There is not a day that goes by when we don’t think of him. It is as if he is around us, looking after us in his own way. My grandmother still fondly narrates tales from his childhood about how brave he was even as a little child. It is amazing to see the pride with which my grandparents talk about him despite losing their son at such a young age. My mother shows immense courage while talking to my brother and me about his commitment towards the family and his duty towards the nation. My brother and I have very faint memories of him, but we thrive on the collection of his pictures and numerous stories we get to listen from the family, his friends and the fellow officers from the unit.

Although the pain of losing him as a son, husband, and father still remains in the family, it gives us immense pride to be a family of a martyr. It is an inexplicable feeling when we hear his course mates and fellow officers’ talk so fondly of him. He was revered and loved by all. He always led from the front and put his men before anything. When he got posted to Kashmir, he was injured and was recuperating at home, but he didn’t want to stay back and wanted to be with his comrades at the earliest. So, before he could fully recover, he was off to his assignment which happened to be his last.

But we know, he was a fighter and he would not have had it any other way. Even though he is long gone now, we still live by his memories and feel him around us. He has been and continues to be an inspiration for many. His memories are etched in our hearts forever which even time cannot erase. Extremely proud and blessed to be his daughter.