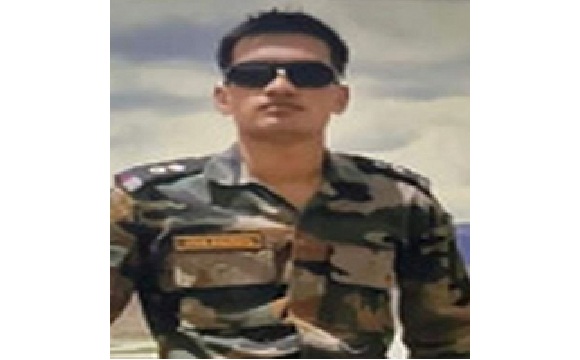 Major Vikas Bhambhu hailed from Rampuriya village in Rawatsar tehsil of Hanumangarh district in Rajasthan. Son of Shri Bhagirath Bhambhu, he was inclined to join the armed forces since his younger days and continued to follow his dream while growing up.  He completed his post graduation in commerce (M.Com) from IIS University, Sri Ganganagar in Rajasthan.  Following his passion he eventually passed the Combined Defence Services Examination and got selected to join the OTA Chennai. He got commissioned into 87 Armd Regt of the Armoured Corps, the combat arm of Indian Army well known for its potent tanks and other heavy weaponry.

After serving for some time with his parent unit, he got selected for flying training and was transferred to the Army Aviation Corps. He got trained as a helicopter pilot and completed his basic Army Aviation Course as a Lieutenant.  He excelled in his training and passed out of the Combat Army Aviation School (CATS) in Nashik. He was awarded Silver Cheetah trophy instituted by the School of Artillery for exhibiting Best All Round abilities in general and tactical flying as well as ground subjects. After serving for sometime, he got married to Ms Shreya Choudhary in the year 2016 and the couple was blessed with a daughter Khwaish in the year 2022. By the year 2022, he had been promoted to the rank of Major and had developed into a professionally competent Helicopter pilot with expertise in various air operations.

During 2022, Major Vikas Bhambhu was serving with the 252 Army Aviation Squadron deployed in the North-East. The squadron was operating Advanced Light Helicopter (ALH), which was known to be a high-performance helicopter designed for operation over a very wide range of weight, center of gravity and altitude conditions. Out of the four variants—(ALH Mark 1, Mark 2, Mark 3 and ALH-WSI) available in the Army, Major Vikas Bhambhu's Sqn was operating ALH-WSI (Weapons Systems Integrated) versions having powerful engine, called Shakti, co-developed by Hindustan Aeronautics Limited (HAL) and Safran of France.  The Advanced Light Helicopter (ALH-WSI) was versatile, multi-role, multi-purpose, highly maneuverable, and rugged in construction.  On 21st Oct 2022, Major Vikas Bhambhu and Major Mustafa Bohara as pilots along with 3 other crew members were tasked for an air mission.

Both the pilots had more than 600 combined flying hours on the Advance Light Helicopter (Weapon Systems Integrated) and over 1800 service flying hours between them. Major Vikas Bhambhu and Major Mustafa Bohara were experienced pilots with substantial flying experience but they apparently did not get adequate time to bring the aircraft under control. Consequently, the aircraft crashed at around 10:43 am and Major Vikas Bhambhu and other crew members could not survive the crash. A joint search operation with teams from the army and air force was launched immediately after locating the crash site, which was very remote and extremely challenging in terms of hills with steep gradients and thick jungle. The search and rescue team eventually managed to retrieve the mortal remains of the valiant soldiers. Besides Major Vikas Bhambhu, the other martyred soldiers included Major Mustafa Bohara, Havildar Biresh Sinha, Naik Rohitashva Kumar and Craftsman Aswin KV. Major Vikas Bhambhu was a valiant soldier and a competent pilot, who at the age of 33 years laid down his life in the service of the nation.