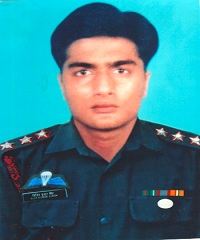 Place of Birth: Jhansi (UP)

Major Vijit Kumar Singh was born in Jhansi and hailed from the state of Uttar Pradesh. Son of an Army officer Lt Col Murli Mohan Singh, Maj Vijit had a brother Santosh and sister Vandita as his siblings. Inspired by his father, who served with 6 Fd Regt in the Regiment of Artillery, Maj Vijit nursed the idea of donning the olive green right from his younger days. Following his passion, eventually he joined the Army and was commissioned into the Regiment of Artillery, the second largest arm of the Indian army.

During 2001, Maj Vijit Kumar’s unit was deployed in Assam for counterinsurgency operations. 17 (Para) Field Regiment was inducted into insurgency prone North Cachar Hill region in Assam and Jiribam in Manipur in 2000. In the following period, the Regiment undertook relentless operations against the terrorists resulted in commendable operational results. On 4th October 2001, his unit received reports about the presence of insurgents belonging to NSCN(IM) cadre near Assam-Manipur border. NSCN(IM) was a faction of National Socialist Council of Nagaland, whose objective was to establish a sovereign, Naga State by unifying all the Naga-inhabited areas in the North East of India. The organization had armed rebels who were engaged in anti-national activities. Based on the intelligence reports it was decided to launch a search and destroy operation to deal with the insurgents under the leadership of  Maj Vijit Kumar. As planned Maj Vijit Kumar reached the designated place along with his team and cordoned off the suspected area.

Whilst the search operation was underway, the team came under attack from the insurgents. Displaying extraordinary leadership and courage, Maj Vijit Kumar quickly redeployed the troops and charged towards the militants. He then in a swift action killed one militant and injured two, forcing them to leave their positions. In the continued action one of the injured militants was about to shoot at his buddy when Maj Vijit Kumar charged towards the militant and drew fire on himself. He was severely injured but managed to kill the militants who posed danger before collapsing on the ground. He later succumbed to his injuries and was martyred. Maj Vijit Kumar was a gritty and a determined officer, who led his men from the front and laid down his life following the highest traditions of the Indian army. Maj Vijit Kumar was given the gallantry award “Shaurya Chakra” posthumously for his extraordinary bravery, grit, fighting spirit and supreme sacrifice.

Citation for the “Shaurya Chakra” awarded to him reads:-

On 04 Oct 2001, Maj Vijit  Kumar was the leading scout in seek and destroy operation against a group of NSCN(IM) CADRE in Assam Manipur border. On approaching a village the patrol was ambushed. Displaying an extraordinary temperament and steel nerves the officer, fired back and charged towards the militants. During the counter-ambush assault by the officer,  one militant was killed and two injured, forcing them to leave their positions, In the continued action one of the injured militants was about to shoot at his buddy when the officer charged towards the militant and drew fire on himself. The officer was fatally injured but did not succumb to his injuries till he killed the militants who posed danger to own troops.