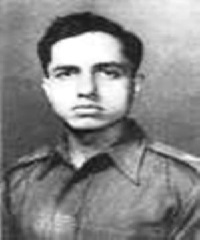 During December 1971, Maj V R Chowdhary’s unit, 9 Engr Regt was deployed in the western sector under the command of Lt Col B T Pandit. On 3/4th Dec 1971, the Indian army crossed the international border spearheaded by 47 Brigade. Two more Brigades, 74 and 91 followed suit making the attack front formidably large. Maj V R Chowdhary was commanding 405 Field coy and was tasked to clear the minefields around Thakurdwara. This was the first time trawls were used to breach enemy minefield. Maj V R Chowdhary and his field Coy successfully cleared the minefields, paving the way for the tanks of 16(I) Armoured Brigade.

The battle across the Basantar river was so intense that the sappers had to open up multiple passages through minefield over a kilometer wide.  At one stage, a composite team of 404 and 405 (commanded by Maj V R Chowdhary)  was formed to undertake the highly challenging task at hand. Maj V R Chowdhary and his comrades successfully completed the assigned task in the nick of time and the Indian tanks dashed across through the path to meet the  Patton tanks of Pakistan army. Throughout this offensive from 3rd Dec to 17 Dec, Maj V R Chowdhary personally supervised the operations, thus inspiring his men with utter disregard for his personal safety. Maj V R Chowdhary’s field coy was invariably stretched to its limits, but he rushed from site to site unmindful of dangers at every turn. However, on 17th Dec 1971, just a few hours before the cease-fire that came into effect at 2000 hrs, Maj V R Chowdhary got hit by enemy shelling and was seriously injured. He later succumbed to his injuries and was martyred. Maj V R Chowdhary was a committed soldier and an outstanding officer who led from the front like a true military leader. He is now considered an icon of the Madras Sappers and 9 Engr Regt.

The citation for Maha Vir Chakra awarded to him reads:-

Major V R Chowdhary was in charge of minefield clearance of Chakra on the Western Front. The safe lanes had to be made with great speed to enable our tanks and anti-tank weapons to reach Chakra, which was in imminent danger of a counterattack by enemy armour. With utter disregard for his personal safety, Major Chowdhary personally supervised the operation, inspiring and motivating his men to their optimum efficiency. Throughout the advance, from 5 December onwards, Major Chowdhary displayed exemplary devotion to duty and was responsible for clearance of minefields of 1,000-1,500 yards depth at Thakurdwara, Lohra and Basantar River. While supervising the minefield lane near Basantar River this gallant officer was killed due to enemy artillery fire. Major V R Chowdhary’s exceptional devotion to duty, extraordinary bravery, inspiring leadership and supreme sacrifice was in the highest traditions of the Army.