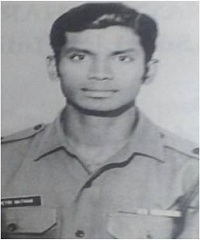 Major Vetri Nathan hailed from Mumbai in Maharashtra and was born on 24th Feb 1941. Son of an Indian Navy veteran Cdr N K Nathan, Maj Nathan joined the army at the age of 21 years in Dec 1962. He was commissioned into 2/11 GR of the famed 11 Gorkhas Rifles Regiment, a regiment known for its valiant soldiers and numerous battle exploits. By 1971, Major Vetri K Nathan had gathered substantial experience in various operations and evolved into a battle-hardened and committed soldier.

The second battalion of 11 Gorkhas Rifles was raised on 11th Jan 1963. With this newly raised Battalion, Maj Vetri was blooded into warfare when the unit was inducted into Mizoram to quell the Mizo uprising. Maj Vetri proved his mettle as a soldier and successfully led many counter-insurgency operations. He was feared by Mizo rebels and was dubbed “The Black Pearl”, with a heavy price on his head.

During the 1971 war with Pakistan Maj Vetri Nathan’s Battalion 2/11, GR was deployed in the Kargil Sector of J & K. A series of hill features ran along the LOC in this sector and held considerable importance for military operations. One such hill feature Point 13620, dominating the Srinagar-Leh highway was under the control of Pakistani forces. The Indian forces had captured this Point during the 1965 war but had to return it as part of the Tashkent Agreement signed on 10 Jan 1966.  As the hill feature posed a serious threat to the movement of troops along the highway, it was very important to dislodge the enemy forces from Point 13620. Thus it was decided by Indian Army to launch an operation to reoccupy Point 13620 and 2/11 GR was assigned this task. The task involved overrunning many enemies held posts along the slopes leading to Point 13620. Maj Vetri Nathan was commanding one of the companies that took on this challenging task and launched the attack on 06 Dec 1971.

Maj Vetri Nathan displaying courage and leadership skills successfully managed to capture the enemy-held post “Black Rocks”. Subsequently, the Company marched on towards their objective of capturing Point 13620. However, the advance was being stalled by the enemy’s Medium Machine Gun post on the summit. After having analyzed the gravity of the situation, Maj Vetri Nathan realized that the enemy MMG post had to be neutralized at any cost. Without regard to his personal safety, he called for the handheld Rocket Launcher and personally rose up to take aim and neutralize the enemy MMG bunker. While he shot off the rocket which knocked off the MMG post, he at the same time took an enemy bullet through his head and was martyred. His martyrdom infuriated his troops who unsheathed their Khukries and went on a rampage against the enemy beheading many soldiers. The daredevil attack by Gorkha soldiers forced the enemy to flee evacuating all the posts before first light. The task assigned to Maj Vetri Nathan’s troops was successfully completed and Point 13620 was captured. The post was named as “Vetri Post” in his honour and a memorial was erected at this place.

Maj Vetri Nathan was a committed soldier and an officer par excellence who laid down his life in the highest traditions of the Indian Army. Maj Vetri Nathan was given the gallantry award, “Vir Chakra” for his exceptional courage, determination, unfaltering leadership, and supreme sacrifice.

The Citation of Vir Chakra awarded to him reads:

Major Vetri Nathan was commanding a company of Gorkha Rifles in the Kargil Sector. On 6 December 1971, the company was given the task of capturing a feature held in strength by the enemy. During the assault, the enemy subjected the company to intense and accurate small arms and artillery fire. Major Vetri Nathan, in utter disregard for his personal safety, moved from man to man encouraging them to press home the attack. Though seriously wounded, he led the charge and captured the objective before succumbing to his wounds.

In this action, Major Vetri Nathan displayed gallantry determination and leadership of a high order.