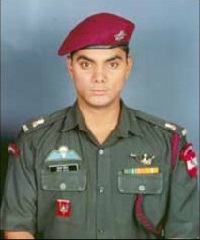 Major Udai Singh hailed from Allahabad in Uttar Pradesh and  was born on 07 Oct 1974. Born in a military family, Maj Udai studied from various schools including St Patricks at Deolali, St Georges, Agra, Army Public School Delhi and Army Public School  Dagshai. Maj Udai was not only brilliant in academics  but was very good in games  sports and other extra curricular activities. Major Udai graduated from Desh bandhu College, Delhi with an honors degree in Political Science and was soon absorbed as a management trainee with the Taj Man singh, Delhi. However, Maj Udai always aspired to follow in the footsteps of his father, Col KKK Singh, who had the distinction of commanding the 17 Para Field Regiment.

Maj Udai followed his dream and passed out from the IMA in June 1997. He went a step ahead and volunteered for the special forces and then joined 4 Vikas , a special group for counter-insurgency operations. Most of Maj Udai’s career was spent almost entirely in the mountains of Kashmir undergoing various rigorous training courses. He did the free fall & the para jumps along with a course in deep sea diving. His life in the army was a source of great pride and enthusiasm for the family and his friends. He loved what he did and never regretted even for a moment about his choice of career.

Maj Udai served in the Northeast from 1997 to 1999, and in Jammu and Kashmir (J & K) for the remaining period. Ever keen for adventure, he volunteered for the Special Forces after five years of service and wrote in his diary, “I dedicate my life to the Special Forces and I promise to make my country, family, friends and myself proud.” In 2001, he was attached to the Vikas Regiment, comprising high altitude specialists of Tibetan origin. He participated in the Kargil War and was then back to fighting the terrorists in Kupwara and Rajouri areas. He had devloped into a battle-hardened soldier always prepared for action that involved seeking and neutralizing the terrorists.

During Nov 2003, Maj Udai Singh’s unit was deployed in J&K for counter-insurgency operations. The unit’s special forces often undertook bold and daring operations against the militants. Maj Udai Singh was assigned one such operation on 29th Nov 2003. He was tasked to demolish the intelligence and logistics network being provided to the terrorists by the over ground workers in Rajouri district of  Jammu and Kashmir. As planned Maj Udai launched a search and destroy operation on 29th November 2003. The team led by Maj Udai physically reconnoitered the thickly forested area. At 1745hrs, in fading light, when Maj Udai was leading his team to lay an ambush, the party suddenly came face to face with a group of terrorists who were approaching from higher ground at a close range of 10 meters.

During the deadly fire fight that ensued, Maj Udai sustained gun shot wound in the neck, while his buddy sustained multiple gun shot wounds. Displaying extraordinary courage, with utter disregard to personal safety, Maj Udai continued to close in with the terrorists, killing one terrorist and wounding another. Major Udai Singh then helped extricating his fatally injured buddy before succumbing to his injuries. Maj Udai Singh was a deep rooted soldier and a gritty officer who always led from the front like a good military leader. Maj Udai Singh was given the gallantry award “Shaurya Chakra”  for displaying outstanding courage, leadership and camaraderie of a very high order.

The citation for the Sena Medal awarded to Maj Udai Singh reads:

Major Udai Singh was tasked to launch his troops immediately by night on 1 July 2002 in Danti Forest, Jammu and Kashmir.At 1030hrs, the leading squad observed terrorist movement and immediately killed one terrorist. The remaining terrorist brought down a heavy volume of fire on the troops.Acting dynamically with utmost tenacity taking advantage of thick forest and restricted visibility Major Udai Singh then moved along with his squad and closed on the terrorist under heavy volume of hostile fire. Major Udai Singh ruthlessly pursued single handedly with extreme courage and excellent marksmanship and tactical acumen under fire killing two more terrorists in close quarter combat. For displayed conspicuous bravery, exemplary leadership and raw courage, Major Udai Singh was awarded Sena Medal (Gallantry).

The citation for the Shaurya Chakra awarded to Maj Udai Singh reads:

Major Udai Singh had developed a comprehensive schedule to demolish the intelligence and logistics network being provided to the terrorist by the over ground workers in the general area in Rajouri district of Jammu and Kashmir. The officer commenced operations by launching a search and destroy operation in the general area at 0300hrs on 29th November 2003. The team physically reconnoitered the thickly forested area. At 1745hrs, in fading light, when the officer was leading his team to lay an ambush, the party suddenly came face to face with a group of terrorist who were approaching from higher ground at a close range of 10 meters. During the deadly fire fight that ensued, the officer sustained gun shot wound in the neck, while his buddy sustained multiple gun shot wounds. Displaying extraordinary courage, with utter disregard to personal safety, the officer continued to close in with the terrorists, killing one terrorist and wounding another. Major Udai Singh then helped extricating his fatally injured buddy before succumbing to his injuries.Major Udai Singh displayed indomitable courage and exemplary leadership in fighting the terrorist and making the supreme sacrifice.

“You have never lived until You have almost died, And for those who choose to fight, Life has a special flavor, The protected will never know!!!” – Capt. R. Subramanian

Maj Udai Singh & Capt R Subramanian or Uddu & Subbu ( as they were fondly known ), both passed out together from the IMA as part of the 100th batch, 6th June 1997. They were then, both commissioned into the 1st Batallion of the Parachute regiment. Uddu & Subbu were inseparable buddies & soul mates.

Capt R Subramanian was martyred on 19 June 2000 and his buddy Maj Udai Singh on 29 Nov 2003 to become soul mates in their martyrdom too.