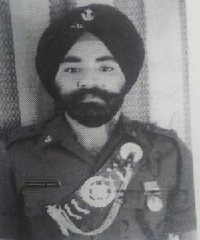 Major Surinder Singh was born on 8th December 1959 in Shillong, Meghalaya into a military family. Son of an army officer, Lt Colonel MS Labana, Maj Surinder Singh wanted to follow the footsteps of his father and join the Armed Forces. He followed his dream and got selected to join the prestigious NDA in Khadakwasala. Maj Surinder Singh got commissioned into the Rajputana Rifles Regiment, a regiment known for its fearless soldiers and numerous battle and theater honours.

After the induction of Indian forces in Aug 1987, as part of Indo-Sri Lanka accord signed on 29 July 1987, the militants were supposed to surrender but the dreaded LTTE backed out and unleashed war on Indian forces. Initially only 54 division of the Army was inducted but the escalation of the operations brought three more divisions 3, 4 and 57 into the conflict. By June 1989, Indian forces had undertaken numerous operations against LTTE but the war was far from over. During June 1989, Maj Surinder Singh’s unit was deployed in the Jaffna peninsula and were operating in Puttur area. Based on information from intelligence sources , a decision was taken to attack a suspected hideout of the LTTE militants in Puttur on 05 Jun 1989. Maj Surinder Singh was tasked to lead that assault operation.

Major Surinder Singh was given the gallantry award, “Vir Chakra”, for his exceptional courage, indomitable spirit and supreme sacrifice during the operation.

Major Surinder Singh was tasked to approach a suspected militant hideout in an area east of puttar in Sri Lanka. He located and identified the hideout. Thereafter, he decided to raid it. On 5th June 1989, he organised his patrol of 15 ORs and went in for the raid during which he personally shot two militants. The patrol observed two militants fleeing the hut. The officer, without worrying about his personal safety, decided to chase the fleeing militants. In the hut were lying two militants earlier shot by him. As he ran past the hut, one militant opened fire at point blank range on Major Surinder Singh and injured him seriously. Despite injury on the chest, the officer turned around, shot dead the injured militant and continued chasing the militants till he collapsed on the ground. He refused to be attended to and directed his personnel to pursue the militants. Eventually, one of the fleeing militants was shot dead.