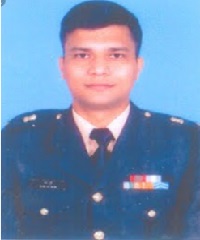 Major Suresh Suri belonged to Hyderabad in Andhra Pradesh. Son of an IAF veteran S V Subba Rao and Mrs S Girija, Maj Suresh was the eldest of three siblings. His younger brother Sunil is an IT professional in Pune, and his younger sister Surekha is a homemaker.

Major Suresh Suri joined the Army in 2001 and was commissioned into the Kumaon Regiment, an infantry regiment known for its gallant soldiers and numerous battle exploits. Major Suresh got married in 2008 to Pallavi but she could not join him as he was serving in a field area in J & K  during that time. After serving for few years with his parent unit, Major Suresh was later deputed to serve with 13 RR battalion in 2007, deployed in J & K for counter insurgency operations.

On 22 Sep 2009, Maj Suresh Suri’s unit had received credible intelligence reports about the presence of terrorists in a village in Bandipora district. A decision was taken to launch a search and destroy operation to nab the terrorists under the leadership of Maj Suresh. As planned, Maj Suresh along with his troops swung into action and cordoned off the suspected house.

After carrying out quick appreciation of the situation, Major Suresh Suri along with three other soldiers entered the house to search for the hideout. On the second floor of house, Maj Suresh found some suspicious loose planks of wood on the roof, which indicated the possibility of a hideout. Maj Suresh decided to scale the roof with another soldier to achieve surprise. However, they came under heavy fire from the terrorists and got seriously injured. Maj Suresh despite being injured retaliated swiftly from his AK-47 gun and also lobbed a hand grenade, killing one terrorist and injuring the other. The second terrorist though injured took cover in the hideout and started firing indiscriminately, causing injuries to other personnel of the search party. Maj Suresh continued to direct fire to ensure the safe evacuation of his injured comrades. However, Maj Suresh later succumbed to his injuries and was martyred.

Citation for the Kirti Chakra awarded to him reads :-

On 22 Sep 2009, Maj Suresh Suri was part of inner cordon around a suspected house. After carrying out quick appreciation of the situation, Major Suresh Suri along with three other ranks entered the house to search for the hideout. On the second floor of house the officer found some suspicious loose planks of wood on the roof where the hideout was expected. The officer scaled the roof with his buddy to achieve surprise.

They however came under heavy fire from the terrorists and got seriously injured. The officer despite being injured retaliated with fire from his Rifle AK-47 and also lobbed a hand grenade, killing one terrorist and injuring the other. The second terrorist took cover in the hide out and started firing indiscriminately, causing injuries to other personnel of the search party. The officer ensured the safe evacuation of injured comrades. In the ensuing fire fight the officer was grievously injured and later succumbed to his injuries.