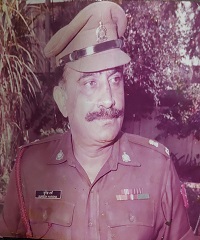 Major Suresh Harsha hailed from Jodhpur in Rajasthan and was born on 16 Dec 1943. Son of Shri Suraj Krishan Harsha, he completed his schooling from Gandhi School, Jodhpur. He was inclined to join the Armed Forces since his younger days and continued to follow his passion while growing up. Eventually, he got selected to join the Army after completing his college and went to OTA Chennai for his training. He was commissioned in June 1968 into the the Army Service Corps, the logistic supply arm of Indian Army.

After putting in few years of service he got married to Ms Sarita Bhalla, daughter of an Army officer Col JC Bhalla on 15 Feb 1976. Subsequently, the couple were blessed with a son Sameer and daughter Shilpa. By 1989, he had put in around two decades of service and had served in varous operational areas.

During 1989, Maj Harsha was serving with the unit based at Secunderabad. But soon the unit was tasked to move to Sri Lanka as part of IPKF operation to contain the volatile situation there. After the induction of Indian forces in Aug 1987, the militants were supposed to surrender but the dreaded LTTE backed out and unleashed a war on Indian forces. Initially, only 54 division of the Army was inducted but the escalation of the operations brought three more divisions 3, 4 and 57 into the conflict. By 1989, Indian forces had undertaken numerous operations against LTTE but the war was far from over. Maj Harsha’s unit was moved to Trincomalee in Sri Lanka to provide critical support to various operations against the LTTE.

Maj Harsha and his troops had to move frequently to support the ongoing operations in their area of responsibility. While on move, they had to maintain a very strict vigil at all times as their routes were prone to IED blasts and surprise attacks by the LTTE militants. On 24 Mar 1989, Maj Harsha along with Maj Uttam Chand Katoch was part of a recce mission on the outskirts when they came under attack by an IED blast. The IED was tied to an abandoned bicycle held against a tree and as soon as the patrol party approached the area it detonated. Maj Harsha fell off the Jeep and got hit by mine splinters across the right of his ribs. Without caring for his safety, Maj Harsha immediately swung into action along with his soldiers and managed to eliminate the militants. He was later evacuated to the base hospital for medical treatment but succumbed to his injuries and was martyred. Maj Suresh Harsha was a valiant soldier and committed officer, who laid down his life in the line of his duty, following the highest traditions of the Indian Army.