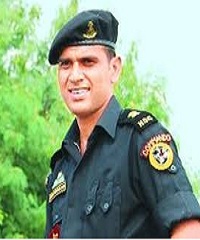 Maj Surendra Badsara was born on 13th April 1980 and hailed from Sikar district of Rajasthan. He was born in a military family wherein his father Keshar Dev Badsara too served in the Army in 17 Poona horse, one of the most decorated Armoured regiments of Indian army. Being brought up in an army background, he too wanted to serve in the Armed Forces and continued to pursue his dream since childhood. Maj Surendra completed his initial schooling from a government school in Kudan village and did his further studies from Kendriya Vidyalaya Ahmednagar in Maharashtra where his father was posted at that time.

He graduated from Dayanand College, Hisar in Haryana and thereafter got selected to join the Army through the Combined Defence Services Examination. He completed his training and joined the Army on 14th June 2003 at the age of 23 years. He was commissioned into 46 Armd Regt of the Armoured Corps, the elite combat arm of the Indian Army. After serving for a few years with his parent unit, he volunteered to be trained as a commando and joined the National Security Guard the elite force specially trained and equipped to deal with anti-terrorist activities. He went on to serve with 52 Special Action Group(SAG) of the NSG.

After the tenure with NSG, he joined 4 Para Battalion and became the officer commanding, the intelligence squad of the battalion in Kupwara. He painstakingly developed a wide network of intelligence sources in a very short time and took part in many successful operations against the militants. Within a few years of his service, he proved his soldierly skills and was awarded two commendation cards and a “Sena Medal” for his valiant deeds. Later he got married to Ms Nisha Kulhari, who too served in the army as a commissioned officer.

During the year 2012, Maj Surendra was serving with 4 Para (SF) the elite special forces battalion of the Parachute Regiment. The unit was deployed in Kupwara district of J & K one of the terrorist-infested districts of Kashmir. The unit personnel maintained a very high state of alert continuously to deal with any eventuality. On May 3, 2012, Maj Surendra took part in a counter-insurgency operation in Kupwara and managed to eliminate six terrorists.

However subsequently during a practice firing session, Maj Surendra got injured due to an “accidental discharge” of bullets from his own weapon that hit his stomach. He was shifted to the Base Hospital at Srinagar and later to the Research and Referral hospital in Delhi for further treatment. Maj Surendra underwent seven major surgeries in the hospital over a period of 50 days. However, the gallant soldier eventually succumbed to his injuries on 21st June 2012 due to multiple organ failure at the age of 32 years. Maj Surendra Badsara was a valiant soldier and a determined officer who laid down his life in the service of the nation following the highest traditions of the Indian Army.