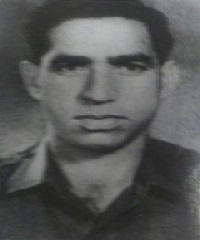 Major Surendar Mohan Sharma was born on 28th August 1936 in Muree, Pakistan and the family was then settled in Chandigarh. Son Shri Amar Nath Sharma, he joined the Army on 15 Dec 1957 at the age of 21 years. He was commissioned into 3 JAK Rif battalion of the Jammu and Kashmir Rifles, one of the most decorated infantry Regiments of Indian Army. He later served with 5 JAK Rif and upon re-raising of 8 JAK Rif, he was one of first officers to join the battalion.

By the year 1965, he had put in over 7 years of service and had served in various field areas along with his parent unit. As the war clouds were gathering in 1965, Maj Sharma’s unit got deployed in the western sector to deal with any misadventure by Pakistani forces. Pakistan launched ‘Op Gibraltar’ during Aug 1965 which entailed large scale infiltration into Kashmir valley to create disturbances. Maj Surendar Mohan Sharma played a stellar role in defending Kalidhar Ridge in Chhamb area on 15 Aug 1965 despite repeated attacks by Mujahedeens & Rajakars and changed the future course of ‘Chhamb Battle’.

During Sep 1965 Maj Surendar Mohan Sharma’s unit 8 JAK Rif was deployed in Chhamb sector in J & K. Pakistan launched ‘Operation Gibraltar’ in Aug 1965, wherein thousands of infiltrators were sent across the border to carry out sabotage and subversion. Following the failure of Op Gibraltar, Pakistan invaded Chhamb district on 01 Sep 1965 triggering an aggressive response from the Indian forces. By 13 Sep 1965, 8 JAK Rif had been part of many successful operations and was established at Kalarawanda in the Sialkot Sector in Pakistan. Maj Surendar Mohan Sharma was functioning as a company commander of one of the companies of 8 JAK Rif battalion.

On the night of the 13th Sept 1965, Maj Surendar Mohan Sharma’s company, along with a troop of tanks were attacked by the enemy forces comprising an infantry battalion and a squadron of Patton tanks.  The enemy was numerically superior and was supported by Artillery and armour.  After heavy shelling and tank fire, the enemy Infantry Battalion attacked the 8 JAK Rif company positions. Despite, heavy odds, Maj Sharma inspired his men to continue the fight. He kept directing the battle from one platoon locality to the other under intense enemy fire. Although the enemy force had overwhelming numerical superiority and fire power Maj Sharma’s company inflicted very heavy casualties on it. After capturing Kalarawanda Maj Sharma’s company dug in defences. The 6 Frontier Force of Pakistan army led the attack next day on Maj Sharma’s held positions along with the Artillery and an Armour Squadron in the late afternoon. Maj Sharma and his men gave a befitting reply to the enemy despite lacking the resources. However during the fierce battle Maj Sharma got seriously wounded and succumbed to his injuries. Maj Sharma was a gallant soldier and a fine officer who led his soldiers from the front.

Maj Surendar Mohan Sharma showed outstanding courage in the face of the enemy beyond the call of duty and laid down his life in the service of the nation. He was given the gallantry award, “Vir Chakra” for his exceptional bravery, fighting spirit and supreme sacrifice.

On the night of the 13th/14th September 1965, Major Surendar Mohan Sharma’s company, along with a troop of tanks was established at Kalarawanda in the Sialkot Sector in Pakistan. After heavy shelling and tank fire, an enemy Infantry Battalion, supported by a Squadron of tanks and artillery attacked our Company positions. Despite, heavy odds, Major Surendar Mohan Sharma  inspired his men to continue the fight. He kept directing the battle from one platoon locality to the other under intense enemy fire, till he was mortally wounded. Although the enemy force had overwhelming numerical superiority and fire power our company inflicted very heavy casualties on it. The courage, determination and leadership displayed by Major Surendar Mohan Sharma were in the highest traditions of the Indian Army.