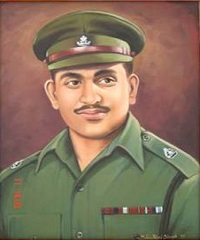 Major Somnath Sharma was born on 31st January 1923 in the Dadh district of Kangra in Himachal Pradesh (then Punjab province). He belonged to a truly military family wherein his father, brothers and sister all served in the Army. His father, Major General Vishwa Nath Sharma was an Army officer, as were his brothers, Lt. General Surindar Nath Sharma and General Vishwa Nath Sharma while his sister, Major Kamla Tewari, was a medical doctor. He went to Sherwood College in Nainital and at the age of ten, enrolled in the Prince of Wales Royal Military College, Dehra Dun before joining the Royal Military Academy. On 22nd February 1942, his military service began, as he was commissioned into the 8th Battalion, 19th Hyderabad Regiment (later 4th Battalion Kumaon Regiment) of the British Indian Army, the same regiment his maternal uncle Captain Krishna Dutt Vasudeva had served with.

Maj Som Nath Sharma fought in World War II under Colonel K S Thimmayya (later the army chief) in Burma with the British Army. In the very first posting, he was deployed in Arakan and proved his mettle. In Arakan while fighting with the Japanese, one of his soldiers was wounded and despite the gunfire from the enemy, he carried the injured soldier “Bahadur” on his shoulders to a safe place for treatment. He was awarded a ‘Mention in Dispatch’ for this act of courage.

On 03 Nov 1947, Maj Somnath Sharma and his company were ordered to reach Badgam village, to take charge of the situation there. His left hand was injured and in a plaster cast, as he had broken it in a hockey match. But he insisted on being with his company in combat. Badgam was one of those routes through which Pakistani raiders were marching towards Srinagar. Two companies of well-equipped soldiers were given the charge of Badgam front, Company A of 4 Kumaon under the command of Maj Somnath and Company D of 1 Para Kumaon led by Capt Ronald Wood. The units deployed were under the command of Brig L P Sen.

In the village, a group of 500 raiders approached Badgam from Gulmarg and soon surrounded the company from three sides. Maj Sharma’s company was under heavy fire and mortar bombardment and sustained heavy casualties. They were massively outnumbered seven to one, but Maj Sharma knew that the Badgam village was very crucial and loss in their position would make the city of Srinagar and the airport vulnerable.

Maj Sharma urged his company to fight bravely and took to the task of filling the magazines and issuing them to the soldiers operating light machine guns. He ran from post to post, motivating his men without fearing for his own life. While fighting the enemy, a mortar shell exploded in the middle of the ammunition resulting in an explosion near him and he was martyred. His last transmission to Brigade HQ, moments before his death, still inspire us, ‘The enemies are only 50 yards from us. We are heavily outnumbered. We are under devastating fire. I shall not withdraw an inch but will fight to our last man and our last round’.

By the time the relief company reached Badgam, their position was lost. However, the 200 casualties suffered by the raiders, slowed their advance, buying time for Indian troops to fly into Srinagar airfield and block all routes to Srinagar. It can be said that Major Somnath Sharma played a pivotal role in preventing the fall of Srinagar and perhaps even Kashmir.

Major Somnath Sharma at the young age of 25 years laid down his life for the nation and became the recipient of first “Param Vir Chakra” of Independent India. His saga of bravery, leadership and unyielding fighting spirit will continue to inspire the future generations.

On 3 Nov 1947, Major Somnath Sharma’s company was ordered on a fighting patrol to Badgam village in the Kashmir Valley. He reached his objective at first light on 3 November and took up a position south of Badgam at 1100 hours. The enemy, estimated at 700, attacked his company position with 3-inch mortars, LMGs, and rifles. Completely outnumbered and with withering fire being brought to bear on its position from three sides, the company began to sustain heavy casualties.

Fully realising the gravity of the situation and the direct threat that would result to both Srinagar and the aerodrome if the enemy attack was not held until reinforcements could be rushed to close the gap leading to Srinagar via Hum Hom, Major Sharma urged his company to fight the enemy tenaciously, with extreme bravery, kept rushing across the open ground to his sections exposing himself to heavy and accurate fire to urge them to hold on. Keeping his nerve, he skillfully directed the fire of his section into the ever-advancing enemy. He repeatedly exposed himself to the full fury of enemy fire and laid out cloth airstrips to guide our aircraft onto their targets in full view of the enemy.

Realising that casualties had affected the effectiveness of his light automatics, this officer, whose left hand was in plaster, personally commenced filling magazines and issuing them to light machine gunners. A mortar shell landing right in the middle of the ammunition resulted in an explosion that killed him.

Major Sharma’s company held onto its position and the remnants withdrew only when almost completely surrounded. His inspiring example had resulted in the enemy being delayed for six hours, thus gaining time for our reinforcements to get into position at Hum Hom to stem the tide of the enemy advance. His leadership, gallantry, and tenacious defense were such that his men were inspired to fight the enemy outnumbering them by seven to one for six hours, one hour which was after this gallant officer had been killed.

He has set an example of courage and qualities seldom equaled in the history of the Indian Army. His last message to Brigade HQ received a few moments before he was killed was: “The enemy is only 50 yards from us. We are heavily outnumbered. We are under devastating fire. I shall not withdraw an inch but will fight to the last man and the last round.”