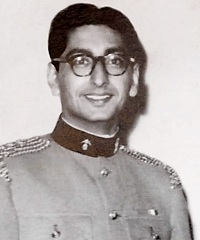 Place of Birth : Meerut dist (UP)

By 1965, Maj Tandon had put in about 17 years of service and had developed into a committed soldier and a fine officer. He had gathered vast experience serving in various operational theatres, both in India and with the UN in Congo, Africa, in challenging work environments. Maj SN Tandan was the B Squadron commander of an armoured regiment, of the Central India Horse, that operated Sherman tanks, which played a significant role in the “Battle of Barki” in the 1965 Indo-Pak war.

However, during the actual operations, Maj Tandon’s B Squadron of The Central India Horse had to face a peculiar situation. Halfway to the town of Barki, there was an old drain called Hudiara where a village of the same name was situated. Pre-empting the Indian attack the enemy blew up the key bridge over the drain and the advance of the Sherman tanks was stopped. The engineers were then called, who constructed the bridge over 50 ft drain along with the help of two companies of 4 Sikh. But it was found that the span was not sufficient for the tanks to cross over. In that situation, Maj Tandon led by his Commanding Officer Lt Col S C Joshi went to the demolished bridge, asked the men to fill up the gaps and crossed over the bridge. By 08 Sep, the tanks of Maj Tandon’s B Squadron, Central India Horse were on the other side of the Hudiara drain.

The final attack on Barki town was planned in two phases and was to commence on 10 Sep 1965. As per the plan the troops of 4 Sikh were to attack and capture the village in the night of the first phase. The Sherman tanks of Maj Tandon’s Central India Horse were to lead the attack in an unorthodox manner with all lights on and all weapons firing on the target. The 4 Sikh battalion was to follow and capture Barki town physically. Finally, Barki was captured by 7 Infantry Division forces with Central India Horse losing six tanks during the operation. The Commanding Officer of CIH, Lt Col S C Joshi and B Squadron Commander Maj SN Tandon were together blown up by an anti-tank mine on 11th September 1965, a few hours before the capture of Barki. The Commanding Officer, Lt Col S.C. Joshi was evacuated but succumbed to his injuries and was martyred a few days later. Maj Sandon was shifted to the military hospital but he too succumbed to his injuries on 3 Mar 1966.

Major SN Tandon was a gallant soldier and an officer par excellence, who led his soldiers from the front like a good military leader. Displaying courage, leadership, and camaraderie of a very high order Maj Tandon laid down his life in the service of the nation following the highest traditions of the Indian Army.