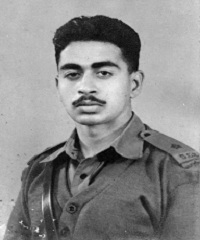 Major Shyamkant Gajanan Kelkar hailed from Maharashtra. He was commissioned into 4/5 GR of the famed 5 Gorkhs Rifles(Frontier Force)  Regiment, a regiment known for its valiant soldiers and numerous battle exploits. As a young officer Maj Kelkar took part in Indo-China war of 1962 as well as Indo-Pak war of 1965.  By 1971, Maj Kelkar had gathered substantial experience in various operations and evolved into a battle hardened and committed soldier.

Though the Indo-Pak war officially commenced on 03 Dec 1971, troops had been mobilized many months before that in view of the prevailing circumstances. The deluge of refugees from the erstwhile east Pakistan into India had started after the Pakistani Army had unleashed terror on the civilian population. The war seemed inevitable and the Indian Army deployed its forces to deal with the threat. 8 Mountain Division was part of that force deployed in that sector with various units under its command.  Maj Kelkar’s battalion 4/5 GR was part of 59 Mountain Brigade that was functioning under the operational control of 8 Mt Div. By the end of Nov 1971, 4/5 GR had already taken part in the battle of Atgram and secured a decisive victory.

However, in the larger game plan the attack on Atgram was a part of a deception plan of 8 Mountain Division under then Maj-Gen K V K Rao, GOC of the Division. Therefore 4/5 GR handed over captured area to a BSF battalion and moved about 75 to 100 kms further south to a place called Kadamtal. The next major operation for 4/5 GR was the battle for Gazipur near Kalaura of Sylhet District,  where Maj Kelkar fought bravely laid down his life .

Sylhet (now renamed Rajguru Nagar), at the North-East corner of (now) Bangaldesh, was an important place from military and geographical point of view. It was the district headquarters and its loss would have led to the loss of a big chunk of its territory. Therefore to defend Sylhet, Pakistan had 202 infantry Brigade (with additional scouts’ battalions) with one artillery regiment of 105 mm guns and one battery of 120 mm mortars. A large segment of the population had been either evaluated or had fled. Keeping with their strategy Sylhet had turned into a ‘Fortress’. The final aim of 8 Mt Div was to capture Sylhet and it had planned to occupy Atgram, Gazipur, Kalaura in stages to move towards the objective.  Maj Kelkar’s 4/5 GR was tasked to capture Gazipur tea estate near Kalaura after their victory in Atgram.

There was an attempt by 6 Rajput battalion earlier to occupy Gazipur which had failed. Maj Kelkar was second in command of the battalion and knew that it was a very challenging task. A tough nut to crack, the resistance was fierce, for the Pakistanis knew that after the failure of attack by 6 Rajput a day earlier, they were in for another one very soon with more vigour and force. But Maj Kelkar and his spirited Gorkhas fought valiantly and annihilated 22 Baluch the Pakistani battalion defending the position. With the attack on its Gazipur position, 22 Baluch was completely disorganized; lost communication with its sub units and vacated the position.

However during the fierce exchange of fire Maj Kelkar got seriously injured and later succumbed to his injuries. Besides Maj Kelkar 10 other soldiers made the supreme sacrifice. Also four officers; Maj Yashwant Rawat, Maj Virender Rawat (both Company Commanders), two young officers, two JCOs and 57 other ranks got wounded during the operation. The battalion proved its mettle and Maj Kelkar led from the front like a true military leader to inspire his men. Maj Kelkar was a soldier at heart and an officer par excellence who laid down his life in the service of the nation.

Major Shyamkant Gajanan Kelkar is survived by his wife and three daughters.