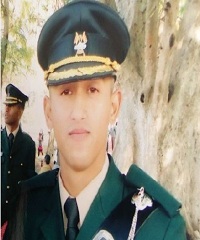 Major Shikhar Thapa was born on 29th June 1987, to Mr Arvind Kumar Thapa and Mrs Poonam Thapa at the hillside city Dharamshala in Himachal Pradesh. His father also served in the Army as a Non commissioned officer in the Army Education Corps of the Indian Army and post-retirement worked as a teacher in a Government high school located at Dharamshala. Maj Shikhar Thapa’s younger sister, Mrs Safurti Thapa also belongs to an Army family as she is married to an Army officer Maj Vivek Mall now settled at Dehradun in Uttrakhand.

Maj Shikhar completed his schooling from Dharamshala and graduated in Bachelor of Technology from IEET Baddi, Himachal Pradesh in the year 2009. Maj Shikhar was fascinated with the Army life and nursed the idea of joining the armed forces since his childhood. He followed his dream after the college education and got commissioned into Indian Army in the year 2010. He got commissioned into 71 Armd Regt of the elite Armoured Corps of the Army, known for its gallant soldiers and daredevil tank operations in various battles.

Maj Shikhar was a keen sportsman and actively participated in all games and sports both at the Squadron and Regiment level. He was also a music lover and had the passion for singing and playing musical instruments. He played guitar quite well and participated in various social events of his Regiment. On 24th July 2015, Maj Shikhar got married to his childhood friend Miss Suvidha Bassi and they had a son, Suvir on 09 April 2017.

After serving for a couple of years with his unit Maj Shikhar Thapa was deputed to serve with 8 Rashtriya Rifles deployed in Doda district in J & K. The Doda district was a terrorist-infested area and the unit was engaged in counter-insurgency operations on a regular basis. Maj Shikhar Thapa and his troops faced challenging situations very often and operated at significantly high-stress levels. Maj Shikhar Thapa was functioning as a company commander in the unit and was known for his strict discipline and professional skills. On 17 July 2015, while on duty on Buchar post in Uri sector, Maj Shikhar Thapa saw around 9:45 p.m., Naik Karthiresan of 19 Madras using his mobile phone. The soldier was pulled up by Major Shikhar Thapa for using the phone while on guard duty, which was strictly against the laid down rules.

Major Shikhar warned him of further disciplinary action, which the soldier did not like and as Maj Shikhar turned around, he shot him in the back with his Ak-47 rifle. Major Shikhar got severely injured and later succumbed to his injuries. In this unfortunate incident of fratricide, in J & K, where the troops operated at considerably high-stress levels, the life of a valiant soldier and a fine officer was lost.  Major Shikhar Thapa was a soldier at heart and an officer par excellence who laid down his life in the service of the nation.

Wife’s Tribute on their son turning one year old :
” He was a great great Lucky Ali fan. His favorite  song was ‘ Shaam savere Teri yaadein Ati hain aa ke dil ko mere yun tadpati hai I’ . He left us to join his post back on 11th May when our son Suvir was a month old. That was the last time he had seen him and today he is one year old. Life doesn’t stop but meaning changes. We see him in stars , shining the most and taking care of us from above”.