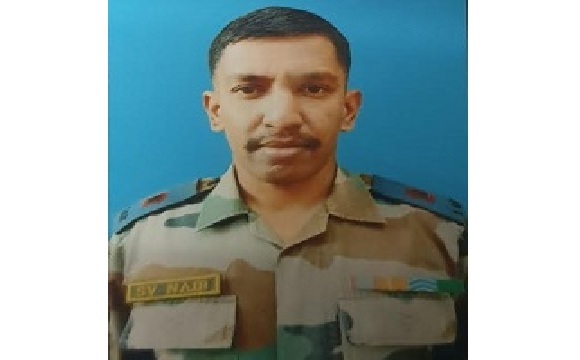 Major Shashidharan Vijay Nair hailed originally from Nedumbassery in Ernakulam, but grew up in Khadakwasla in Pune home to the prestigious National Defence Academy. Son of late Shri Vijayan Nair and Smt Latha Nair, he had a sister Sheena as his sibling. His father served in Central Water and Power Research Station and took early retirement owing to his poor health. Born on 30 July 1985, Maj Nair studied from two Kendriya Vidyalayas in Girinagar and the NDA at Khadakwasla. He then went on to graduate in science from Fergusson College Pune in 2006. He always nursed the idea of serving in the Armed Forces and joined the National Cadet Corps (NCC) during his college days.

He excelled in all aspects of training in NCC and proved to be the best cadet of his batch. He was also a good athlete and a keen basketball player. Maj Nair led a tough life right from his young and carefree days, when his father passed away during the second year of graduation. During his college days, affectionately called “Shashi” among friends, he would cycle 20 km every Sunday, sharp at 6 am to reach Fergusson College to attend NCC classes and physical drills. He was very punctual about all his NCC drills and never missed a class. He was a fitness enthusiast and would quickly master every physical exercise, given to him. He would not only motivate his fellows to maintain physical fitness but encourage them to excel in academics as well.

Following his passion he eventually passed the Combined Defence Services Examination and got selected to join the OTA Chennai. He passed out on 10 Dec 2007 as a Lieutenant at the age of 22 years. He was commissioned into 2/1 GR battalion of 1 Gorkha Rifles Regiment, a Regiment known for its intrepid soldiers and numerous battle exploits.  After joining his unit, he soon learnt the required field craft skills and also learnt Gurkhali language as he was now a Gorkha Regiment officer. After serving for a couple of years, he got married to Ms Trupti, an MCA graduate from Pune on 24 April 2012. By 2019, Maj Nair had served in various operational areas including high altitude areas and the LOC. He had also served as an instructor in the cadet-training wing at the CME (College of Military Engineering), Pune.

During 2019, Maj Shashidharan Nair’s unit was deployed in Rajouri district of J & K under the command of Col Lalit Jain. The unit was manning the forward posts in the Nowshera sector along the LOC. The Nowshera sector often saw ceasefire violations and infiltration attempts by the militants from across the border. The infiltration bids invariably were accompanied with artillery shelling and increased activity by the BAT(Border Action Team) of Pakistani forces. In another such attempt by the BAT, an IED (Improvised Explosive Device) was planted in the foot track along the LOC to target soldiers patrolling the Lam area in Nowshera sector. On 11 Jan 2019, one Reconnaissance and Surveillance team was tasked by 2/1 GR to carry out the recce of the area under its  AOR (Area of Responsibility).

The team came under attack by an IED blast and one Junior Commissioned Officer and two more soldiers got injured. Later one young soldier of the unit Rifleman Jiwan Gurung succumbed to his injuries. Maj Shashidharan Nair informed his CO, Col Lalit Jain, who then set off for the blast site. In the meantime Maj Shashidharan too proceeded for the blast site along with his QRT (Quick Reaction Team). On reaching near to the blast site, Maj Shashidharan immediately launched the combing operation to secure the area against any other IEDs. He also directed his troops to occasionally fire at the surrounding bushes to flush out hiding terrorists if any on either side of the blast site. As the operation was fraught with tremendous risk, Maj Shashidharan was himself leading it, like a true military leader.

At around 3 PM, as Maj Shashidharan reached about 20 meters form the blast site, he sensed something amiss and ordered his team to halt. Without caring for his own safety, Maj Shashidharan said that he would move alone first and they should follow him only if he signaled.  But as Maj Shashidharan stepped forward, he came under a massive IED blast and was severely injured.  His CO Col Lalit Jain who had also reached the site by then and other troops could not move forward as the area was not sanitized and any movement entailed great risk. Maj Shashidharan Nair soon succumbed to his injuries and was martyred. Maj Shashidharan Nair was a committed soldier and a fine officer, who led from the front and laid down his life in the service of the nation.

On 11 Jan 2019, the nation lost a brave officer and Trupti his wife of six years lost the pillar of his life. Eight months into their engagement Trupti was diagnosed with multiple arterioscleroses, which reduced her movements and put her in a wheelchair. Trupti's  family members as well as some of Major Nair’s well-wishers advised him to call off the engagement, but he refused and eventually got married to his love on 24 April 2012. However soon after, Trupti suffered another stroke which left her paralyzed below the waist. But the young couple made it a point that they would party together whenever possible. And so, Trupti would attend all get-togethers, where Maj Shashidharan would wheel her or even carry her in his arms whenever required.

Maj Shashidharan would carry her literally at times or use a portable wheelchair to carry her everywhere; parties or restaurants or anywhere else. He would not like sympathy or pity and never asked for any leeway during the course of his duties.  Maj Shashidharan’s martyrdom brought this incredible love story to a tragic end. Though Trupti felt as if her world had crumbled and lost hope in life initially, she soon saw inspiration in Maj Shashidharan's words and deeds. She reminded herself that she was the wife of a gallant soldier and needed to live a life of pride and dignity. Now she works as an HR manger in a private firm and is striving hard to move ahead in life in an attempt to carry forward the legacy of the bravest man she ever knew.