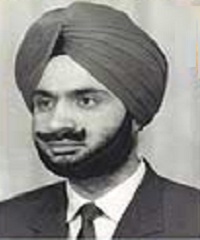 Major SPS Waraich was born on 13 April 1941. He was married to Rupinder Kaur and the couple had two daughters named  Simmi and Neetu.  He was  commanding 15 Punjab Regiment which played a major role in 1971 war with Pakistan.

During Indo Pak in 1971,  Maj Waraich’s unit of Punjab Regiment was deployed in Hussainiwala village in Firozpur district in Punjab.  The Indian enclave of Hussainiwala lies west of the Sutlej along the Ferozepur-Lahore highway. It covers about 7.5 hectares and runs in a parabola from the rail and road bridge towards Shamoke in a northwesterly direction.  The village is on the border with Pakistan, opposite the Pakistani village of Ganda Singh Wala.

On  3 December 1971, a routine tea party was organized at battalion headquarters in the irrigation bungalow to bid farewell to the retiring Subedar major.All the officers and junior commissioned officers, except the minimum essential required for vigilance in the enclave, attended it.  The traffic of foreign tourists and load carriers flowed as usual, and the last vehicle left the barrier almost at dusk. Unknown to the gathering at the party, Pakistan 106 Infantry Brigade had concentrated its attacking troops close to the barrier and the localities defended by the perimeter company.  The Pakistani plan envisaged a three-pronged attack, with one thrust along the main road axis through the barrier, the second from the south towards the mouth of the bridge over the perimeter-defended locality, and the third from the northwesterly direction overrunning the BOPS.

Around at 1835 hours, all the localities were accordingly subjected to intense artillery shelling. Some Pakistani detachments occupied the Ullake bund junction against the surprised opposition, almost without resistance, as a preliminary operation. Some officers attending the tea party rushed back to their command posts. It was a preplanned attack by Pakistanis. In the Indian side the approach astride the main road inclusive of the brick kiln tower in the “Samadhi” area was with “C” company under Maj Waraich. Amidst the Pakistan artillery shelling with four infantry battalions(5000 men ) and a squadron of tanks (15), Maj Waraich was reportedly seen being captured alive in a hand to hand scuffle. The battle continued till the 4th evening and Capt KJ Sandhu was also captured though wounded, 34 other ranks were also captured. Maj SPS Waraich’s name was reportedly announced on 04-12-1971 as being captured after he and Maj KJS Sandhu were captured on 03.12.1971 from the Husainiwala sector.

Mr Ashwini Kumar, then IG of the Border Security Force who had gone to Munich with the Indian Hockey team found out through Col AI Dara, then manager of the Pakistan Hockey team at the Munich Olympics as a personal favour to him at the Munich Olympics in 1972 that Major Waraich was being held in Dargai jail, NWFP. Col Dara got this information from Gen Riaz, Governor Balochistan. Major SPS Waraich s name is first in the list of 40 Missing defence personnel (later expanded to 54) by Samarendu Kundu , Minister of State for external Affairs in 1979 in the Lok Sabha in reply to a question number 6803 by Amarsinh Pathwa.

Col Habib Tanwar wrote a book in 2015 ” Kaiser e Hind – Battle of Husainiwala” where he said Maj Waraich was captured by a Havildar Khizr and later killed in friendly fire. However, on enquiring from him directly , he said he had only heard this and did not even know the name but correlated when asked about a Maj SPS Waraich in 1972 after the war by Maj Lehsarab Khan. Hence this account is debatable.

Major SPS Waraich is survived by his Wife and daughters.