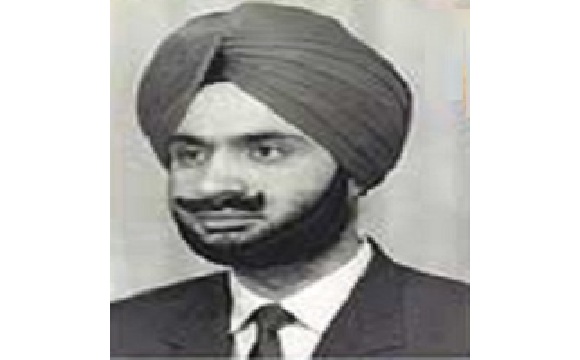 Major Sharanjit Pal Singh Waraich hailed from Punjab and was born on 13 Apr 1941. Son of a Police Officer, he had inclination to serve in the Armed Forces since his younger days. After completing his education he joined the army as a commissioned officer. He was commissioned into the 15 Punjab Battalion of the Punjab Regiment, an Infantry Regiment with a long history of gallantry and battle honours. He soon developed into a tough soldier and fine officer who commanded the respect of his seniors and men as well.

After serving for few years, he got married to Ms Rupinder Kaur daughter of then a serving Army Officer Brigadier Bant Singh and the couple had two daughters Simmi and Neetu. By the year 1971, he had been promoted to the rank of Major and had served in various challenging operational areas. In the later part of 1971 when the war clouds appeared on the horizon, his unit 15 Punjab got deployed on the western front.

During Indo-Pak war in 1971,  Maj SPS Waraich ’s unit 15 Punjab was deployed in Hussainiwala village in Ferozepur district of Punjab.  The Indian enclave of Hussainiwala lay west of the Sutlej along the Ferozepur-Lahore highway. It covered about 7.5 hectares and ran in a parabola from the rail and road bridge towards Shamoke in a northwesterly direction. The enclave was very important economically as it formed a part of the Hussainiwala head works that fed the Gang Canal system which irrigated the arid district of Ganganagar and Karanpur. Militarily, the road-rail bridge in the area provided a readymade bridgehead across the Sutlej to support offensive operations in developing a thrust towards Lahore.

15 Punjab with Lt Col Shastry as its commanding officer was functioning under the operational control of 7 Infantry Division. The unit was moved to the Hussainiwalla enclave in February 1971 and was given the task of defending it, particularly the headworks. Three companies of the Border Security Force in that area were placed under the battalion’s operational command to hold border outposts and generally augment its man-power resources. On  3 Dec 1971, a routine tea party was organized at battalion headquarters in the irrigation bungalow to bid farewell to the retiring Subedar major. All the officers and junior commissioned officers, except the minimum manpower required for vigilance in the enclave were in attendance. Unknown to the gathering at the party, Pakistan 106 Infantry Brigade had concentrated its attacking troops close to the barrier and the localities defended by the perimeter company.  The Pakistani plan envisaged a three-pronged attack, with one thrust along the main road axis through the barrier, the second from the south towards the mouth of the bridge over the perimeter-defended locality, and the third from the northwesterly direction overrunning the BOPs.

15 Punjab deployed C Company with Maj SPS Waraich as Company Commander in the vicinity of the barrier to cover the main Kasur-Ferozepur axis and D Company with Maj KS Sandhu as Company Commander in depth near the perimeter to meet any outflanking enemy move from the southwest along the river line. The main attack commenced about 1830 hours with Pakistan's 3 Punjab Battalion assaulting the perimeter locality and walking straight into a well-concealed minefield in thick sarkanda outgrowth which caught fire from exploding mines. At the same time, Pakistan's  41 Baluch commenced an assault along the right back of Dipalpur bund towards the memorial through the barrier-defended locality. The troops of Maj KS Sandhu and Maj SPS Waraich resisted stiffly and a fierce hand-to-hand battle ensued  in which they were seen facing wave after wave of assaulting Pakistani troops. Despite the resistance of the defenders, the Pakistani assault progressed, but was finally halted at the memorial, which changed hands twice.

Subsequently the road rail bridge was demolished to thwart enemy's attempt to enter the Indian territory and save Ferozepur. The troops of 15-Punjab played a crucial role in delaying the Pakistani advance and gaining time to take action to save Ferozpur.  However during this operation 15 Punjab lost its 53 men and two officers and 35 men were taken prisoners. Amidst the Pakistan artillery shelling with four infantry battalions(5000 men ) and a squadron of tanks (15), Maj Waraich was reportedly seen being captured alive in a hand to hand scuffle. He was later declared "POW", but he never returned thereafter.

A confusion continued to persist about Maj SPS Waraich's whereabouts, as some of the Prisoners Of War (POW) lodged in a Pakistani jail, later informed about the presence of Maj SPS Waraich in Pakistani Jail.  Later his wife Smt Rupinder Kaur and daughter Simmi Waraich during their search found many leads/evidences that gave credence to the fact that Maj SPS Waraich was being kept as a POW in Pakistan. Pakistan, however never acknowledged the presence of Maj SPS Waraich in a Pakistani jail. His daughter Simmi Waraich even visited Pakistan in 2007 as part of a delegation of 14 NOK(Next of Kin) of missing soldiers, but there was no fruitful outcome. Presently, Maj SPS Waraich’s name features on the official list of the ’54 Personnel Missing in Action’, tabled in the Lok Sabha in 1979 by the then Minister of State of External Affairs Shri Samarendra Kundu.