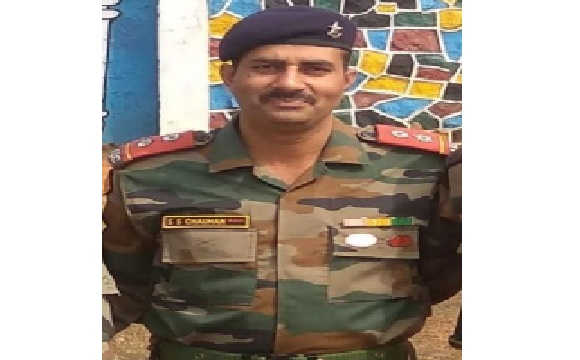 Subedar Major Shamsher Singh Chauhan hailed from Ratan Thal village in Kosli Tehsil of Rewari district in Haryana. Son of an army veteran Capt Bhavani Singh and Smt Kamlesh Devi, he was born in the year 1980 and was the only brother of his three sisters. Born in a military family, Sub Maj Shamsher Singh Chauhan always nursed the idea of joining the armed forces since his childhood. He followed his dream and joined the army after completing his education. He was commissioned into Army Education Corps, the corps responsible to impart educational training to the troops of Indian Army in both combat and non-combat operations.

After serving for few years, he got married to Ms. Rajni Devi and the couple had a son Prayag, and two daughters Falguni & Dhaniya. By the year 2022, he had put in substantial years of service and had been promoted to the rank of Subedar Major.

During 2021-22, Sub Maj Shamsher Singh Chauhan was serving with 22 Mech Inf battalion, deployed in Ladakh region. The unit troops were manning the forward posts in the Ladakh sector.  The border remained highly active and volatile with ceasefire violations occurring very often and without any warning. Besides manning the forward posts, the unit also launched regular armed patrols to check any infiltration from across the border. Besides facing stressful situations, Sub Maj Shamsher Singh Chauhan and his comrades also faced inhospitable terrain under extreme weather conditions. Thus the work conditions demanded a very high level of physical as well as mental fitness.
At the posts, the soldiers had to undertake various measures to beat the hostile weather. Among other things, the soldiers also used heaters to keep their posts warm enough to operate. On 02 Jan 2022, one of the bunkers manned by 22 Mech Inf soldiers, caught fire. The unit launched a rescue operation immediately to save the lives of the trapped soldiers. Sub Maj Shamsher Singh Chauhan took the lead and swung into action to move the soldiers to safety. However, the fire was followed by a blast, which had a devastating effect. Sub Maj Shamsher Singh Chauhan got severely injured in the blast and was shifted to the Military Hospital for medical treatment. However he later succumbed to his injuries on 03 Jan 2022 and was martyred. Sub Maj Shamsher Singh Chauhan was a valiant soldier and committed JCO, who laid down his life in the line of his duty, while saving the lives of his fellow soldiers.
Sub Maj Shamsher Singh Chauhan is survived by his father an Army veteran Capt Bhavani Singh, mother Smt Kamlesh Devi, wife Smt Rajni Devi, son Prayag and daughters Falguni & Dhaniya.