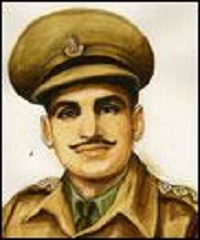 Major Satyapal Chopra was born on 12 Nov 1922 and had inclination to join the Armed Forces since his childhood. Son of Shri Gouri Nath Chopra, Maj Satyapal joined the Army at the age of about 20 years on 01 July 1942. He was commissioned into the Maratha Light Infantry, a Regiment known for its intrepid soldiers and gallantry in various operations.

The attack by Pakistani raiders on Jammu and Kashmir which commenced in Oct 1947 continued unabated and they captured Jhangar on 24 Dec 1947. The capture of Jhangar gave them the strategic advantage to push for their advance to Naushera and Poonch.  Thus the recapture of Jhangar became very important to thwart the advance of enemy forces to Naushera. In order to to recapture Jhangar, Indian Army planned a two Brigade advance on Naushera-Jhangar road. During this advance two companies of 3 Maratha Light Infantry were tasked to march as a vanguard of 50 Para Brigade. Maj Satyapal Chopra was commanding one of the companies that took on the assigned task.

Maj Satyapal Chopra unnerved by the sudden attack rushed forward with a platoon to a position to provide covering fire to his troops. Realizing the precarious situation of the entrapped soldiers, he kept on firing despite being wounded in his face. Maj Chopra  then turned to evacuate his injured soldiers lying on the open ground to safety. He successfully manged to extricate three injured soldiers but when he was trying to evacuate the fourth soldier , he was shot through the head. Maj Satyapal Chopra succumbed to his injuries and was martyred. Maj Satyapal Chopra displayed exceptional courage and unfaltering leadership during the operation following the highest traditions of the Indian Army. He was given the nation’s second highest gallantry award, “Maha Vir Chakra” for his outstanding bravery, steadfast resoluteness and supreme sacrifice.

On 15 March 1948, Major Satyapal Chopra was commanding the left forward company during the advance on Jhangar. The hostiles lay strongly entrenched on Pir Thil Nakka, a formidable hill feature, with their bunker well camouflaged. They held their fire until Major Chopra’s company and other company on the right were in the open space of ground nearly 200 yards away from their position. Both the companies came under heavy fire and were pinned to the ground. The enemy swept the area with four machine guns and six light automatics. Without caring for his personal safety, Major Chopra rushed forward with one platoon to an intermediate position from where he gave his troops covering fire. He was wounded in the face but he kept on fighting. He then turned to the evacuation of his wounded men who were lying on the exposed ground swept by enemy machine guns. He managed to remove three of his men but as he was trying to remove the fourth man, he was shot through the head and fell mortally wounded. He made the supreme sacrifice in order to save the lives of his comrades and displayed leadership qualities and devotion to duty of the highest order.