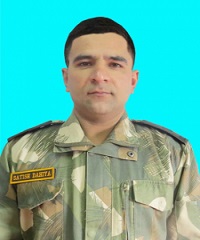 Major Satish Dahiya was born on 22 Sep 1985 and hailed from Banihari village in Mahendragarh district of Haryana. The only child of Shri Achal Singh Dahiya and Smt Anita Devi, Maj Dahiya completed his schooling from Uttar Pradesh and pursued higher studies from Rajasthan University. Thereafter he joined the army and was commissioned on 12 Dec 2009 into the Army Service Corps, the logistic supply arm of Indian Army.

He later got married to Ms Sujata and the couple had a daughter Priyasha. After serving with his corps for a couple of years Maj Dahiya was deputed to serve with 30 RR battalion deployed in J & K area for counterinsurgency operations. While serving with 30 Rashtriya Rifles unit, Maj Dahiya participated in many counterinsurgency operations. He was a soldier at heart and an officer par excellence, who believed in leading from the front in an operation like a true military leader.

During Feb 2017, Maj Satish Dahiya was serving with 30 RR battalion deployed in Kupwara district of J&K for counter-insurgency operations. On 14 Feb 2017, information was received from the intelligence sources about the presence of militants in Handwara area of J & K. After analyzing the specific inputs it was decided by the security forces to launch a joint operation of J & K police and army’s 30 RR unit to nab the militants. The joint team swung into action and the operation started around 5 PM in the evening of Feb 14, 2017. As per the intelligence inputs, the militants were holed up in a residential building and the joint team threw a cordon around the suspected area.

On being challenged by the troops, the terrorists opened fire at them from their hideout. A fierce gun battle followed lasting several hours. Maj Satish Dahiya was leading the operation, tactically moving his troops to close all escape routes for the militants. The militants in sheer desperation resorted to indiscriminate and heavy firing against the troops. Maj Dahiya and his comrades retaliated with accurate fire in which three terrorists were killed and the remaining fled downhill towards a nullah. Maj Dahiya, unmindful of his personal safety, chased the fleeing militants and killed one more but he too was injured in his right thigh. Oblivious of his injury, he kept chasing the fleeing militants and killed one more but this time he was hit in the abdomen by a militant’s fire from close range and fell unconscious. Maj Dahiya was evacuated for medical treatment but he succumbed to his injuries on the way to the hospital and was martyred. Maj Satish Dahiya was a gallant soldier and a gritty officer, who laid down his life in the service of the nation following the highest traditions of the Indian Army. Maj Satish Dahiya was given the gallantry award, “Shaurya Chakra” for his raw courage, leadership, fighting spirit and supreme sacrifice.