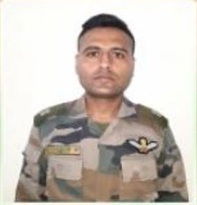 Major Sankalp Yadav hailed from Jaipur in Rajasthan and was born on 29 March 1993. Son of Shri Surendra Kumar Yadav and Smt Usha Yadav, Maj Sankalp had an elder brother Rohish as his sibling. He grew up in the Nand Puri locality of Jaipur and did his initial schooling from Maharaja Sawai Man Singh Vidyalaya at Jaipur. He then went on to complete his 12th class from Kapil Gyanpeeth (KGP- Mansarovar) School, Jaipur in the year 2011. He was a bright student and was also good at extra-curricular activities.

Though there was no one in his family serving in the Armed Forces, he was inclined to join the Army since his childhood. Eventually he got selected to join the NDA after his schooling and became a part of 126th NDA Course. He passed out of NDA in 2014 and moved to IMA Dehradun for further training. He passed out from IMA as a Lieutenant in June 2015 at the age of 22 years.  Eventually he got commissioned as a Lieutenant in the year 2015 at the age of 22 years. He was commissioned into 324 Field Regiment of the Regiment of artillery, the combat support arm of the Indian Army well known for its booming guns and heavy weaponry.

During 2022, Major Sankalp Yadav was serving 663 Army Aviation Squadron of the Army Aviation Corps based at Srinagar (Shalateng Garrison)  in J&K. The Squadron was operating Cheetah helicopter, a single-engine helicopter, of 1970s vintage and derived from the French Alouette. The Cheetah Helicopter was known to be a high-performance helicopter designed for operation over a very wide range of weight, the center of gravity and altitude conditions. The five-seater Cheetah helicopter was versatile, multi-role, multi-purpose, highly maneuverable and rugged in construction.  It was suitable for commuting, observation, surveillance, logistics support, rescue operations and high altitude missions. Major Sankalp Yadav and his Captain Lt Col Vivek Kumar Dwivedi were tasked for one such high-altitude mission on 11 Mar 2022.

The mission was to evacuate an ailing BSF soldier from a forward post at Chorogah near LOC in Bandipora district of J&K. The forward post was located at a high altitude in a remote and inaccessible area. Maj Sankalp Yadav and his captain Lt Col Vivek Kumar Dwivedi took off for the mission as planned in the Cheetah helicopter. The mission was uneventful for the initial part but the helicopter lost communication contact with the forward post at Gujran in the Baraub area after some time as it developed a technical snag. The engine seemed to have malfunctioned and the aircraft became uncontrollable. The helicopter eventually crashed in the Baraub area of Gurez in the Bandipora district of J&K.  Maj Sankalp Yadav and Lt Col Vivek Kumar Dwivedi got severely injured during the crash and were evacuated to 92 Base Hospital at Srinagar. However, Maj Sankalp Yadav later succumbed to his injuries and was martyred. Maj Sankalp Yadav was a committed soldier and professionally competent pilot who laid down his life at the age of 29 years in the line of his duty. He was given the gallantry award, “Sena Medal” (posthumous) on Aug 15 2022 for his exceptional courage, devotion to duty, and supreme sacrifice.