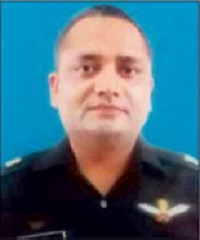 Major Sanjeev  Lathar  was born on 28th  February 1983 in Vidya Nagar of Bhiwani district in Haryana. He did his schooling from Kunjpura Sainik School and Bhiwani Bal Bhavan Public School. In 2000, he got selected to NDA and was commissioned in 2004 in the Gorkha Regiment. After serving for few years in his unit Maj Lathar  got selected for the air wing of the Army and was sent for the flying training. He got trained as a helicopter pilot and later got posted to 659 Army aviation squadron engaged in air  recce and observation of sensitive border areas.
Major Sanjeev Lathar was passionate about flying and soon evolved into an ace pilot having skills to undertake various operational missions. He also served as an instructor with the responsibility of training many young officers. In 2006, he got married to Shalini, the daughter of Jagraon Mann, a resident of Dadri.
Helicopter Crash at Siliguri: 30 Nov 2016
During 2016, Major Sanjeev was serving with  659 Army Aviation Squadron based in West Bengal. The unit was based in Sukna military base about 10 kms from Siliguri in Darjeeling district of West Bengal. On 30 Nov 2016, Maj Sanjeev along with his co-pilot Maj Arvind Bazala was tasked for an operational  mission along the eastern border. The missions undertaken by 659 Army Aviation Sqn usually included the information gathering by recce and observation of critical border areas for analysis by the Trishakti Corps HQs based at Sukna military base.
Maj Sanjeev took off for the mission as planned in the Cheetah helicopter. The Cheetah is a single-engine helicopter , of 1970s vintage and derived from the French Alouette. The mission was uneventful for the most part but when the helicopter was nearing to the base, it developed a technical snag. The engine malfunctioned at about 100 Ft from the ground and the aircraft lost control with the ATC. The helicopter crashed and Maj Sanjeev and the co-pilot Maj Arvind Bazala got severely injured, who later succumbed to their injuries. Maj Sanjeev was due for his promotion to the rank of Lieutenant Colonel  in June next year but the fate had different plans for him. Major Sanjeev Lathar was a proficient pilot and a dedicated soldier who laid down his life in the service of the nation.