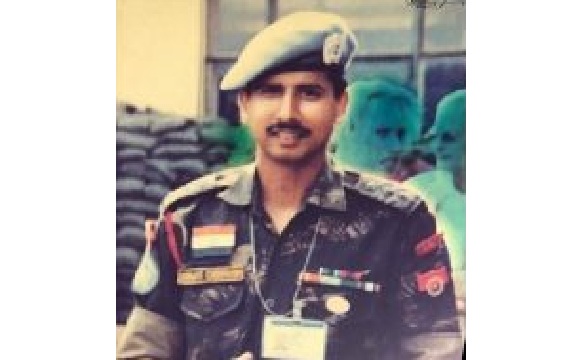 Major Sanjeet Choudhary hailed from Rajapur village of Begusarai district in Bihar and was born on 06 June 1965. Son of Shri Janaki Jiwan Choudhary and Smt Sunitha Choudhary, Maj Sanjeet was the youngest among five, he had two elder brothers and two elder sisters. He did his schooling at the boarding school Taliyan in Bihar he was inclined to join the armed forces since his childhood. Eventually, he got selected to join the NDA after his schooling and later moved to IMA Dehradun for further training. He joined the army on 5 Jun 1986 at the age of 21 years and was commissioned into the 13 Garhwal Rifles battalion of the Garhwal Rifles Regiment, an infantry regiment known for its intrepid soldiers and numerous battle honours.

After serving for a few years, he got married to Ms. Geetanjali, daughter of an army officer Colonel Shyam Lal Dogra on 04 Dec 1992. Thereafter, he got posted to Suratgarh in the Sri Ganganagar district of Rajasthan. Subsequently, he got selected to be a part of the Indian contingent in the United Nations Peacekeeping Mission in Congo.  After completing his stint with the UN Mission, he was posted to Dalhousie. In February 1996, Maj Sanjeet and Smt Geetanjali were blessed with a daughter Tanisha. Towards the end of 1996, Maj Sanjeet got posted to the J&K area and as it was a field area, his wife and daughter moved to Tumsar, near Nagpur, where her parents were residing.

During 1997 Maj Sanjeet Choudhary’s unit was deployed in the trouble-torn Kashmir valley. As the area of responsibility (AOR) of the unit was affected by militant activities, the unit troops had to maintain a high level of readiness at all times and often undertook operations against the militants. Maj Sanjeet Choudhary was tasked with one such operation on 31 Oct 1997.

During this operation, Maj Sanjeet Choudhary displaying gallantry and leadership of a high order made the supreme sacrifice. Maj Sanjeet Choudhary’s wife Smt Geetanjali Choudhary took the tragedy in her stride and decided to join the army to carry forward the legacy of her husband. In June 1998, she cleared the SSB in Bangalore and and was commissioned into the ordnance corps as an officer on 06 Mar 1999. Maj Sanjeet Choudhary was a valiant soldier and fine officer who led from the front and laid down his life at the age of 32 years in the service of the nation.