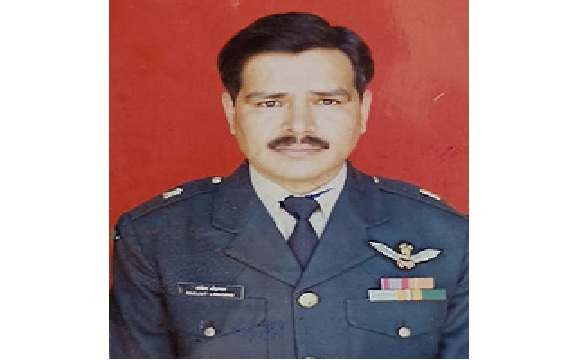 Major Sanjay Lochub hailed from Delhi and was born on 01 Dec 1979.  He was inclined to join the armed forces since his younger days and continued to follow his dream while growing up. Following his passion, he eventually donned the Army uniform and was commissioned into Regiment of Artillery, an important combat support arm of the Indian Army. After serving for some time with his parent unit, he got selected for flying training and was transferred to the Army Aviation Corps. He got trained as a helicopter pilot and completed his basic Army Aviation Course from Jhansi and Advance Army Aviation Course from Nahisk. By the year 2001, he had been promoted to the rank of Major and had developed into a professionally competent Helicopter pilot with expertise in various air operations.

During Jan 2001, Major Sanjay Lochub was serving with 9(1) Recce and Observations Flight belonging to the  Army Aviation Sqn based in J&K.  The 9(1) R&O Flt was operating Chetak helicopters, a single-engine helicopter, powered by an Artouste - III B turbo shaft engine. The helicopter had a range of 500 kilometres and a top speed of 185 kilometres per hour. Seven people, including two pilots, could be transported in the single-engine helicopter. The Chetak helicopter was versatile and was being used for different purposes ranging from commuting, cargo transport as well as for casualty evacuation and search and rescue operations. On 30 Jan 2001, Major Sanjay Lochub was tasked with one such air mission along with Capt Rajesh Garg as his co-pilot. The mission was to fly as an escort helicopter to the chopper carrying the Northern army commander Lt Gen HM Khanna.

Major Sanjay Lochub and Capt Rajesh Garg also had onboard with them, Brig Raman Sehgal, Military Secretary to the GoC-in-Chief, Northern Command, and para commandos Ptr Pavan Carpenter & Ptr Sunil Shashtri. Major Sanjay Lochub and Capt Rajesh Garg took off as planned in the noon of 30 Jan 2001 to 25 Division sector in Rajauri. However on the way near the Mata Vaishno Devi shrine, the Helicopter faced an emergency situation.  The area was considered to have some of the most difficult terrains in the country, throwing unexpected challenges to the pilots. The mountains and the rapidly changing weather conditions caused a huge number of air mishaps and casualties. The Chetak Helicopter presumably developed a serious snag that the pilots could not rectify in time.  Major Sanjay Lohchub and Capt Rajesh Garg were experienced pilots with substantial flying experience but they apparently did not get adequate time to bring the aircraft under control. Consequently, at around 1350 hrs, the aircraft crashed at the Sanjichhat helipad near the Mata Vaishno Devi shrine. The helicopter got engulfed in flames which proved fatal for the pilots Major Sanjay Lochub and Capt Rajesh Garg as well as for the passengers Brig Raman Sehgal, Ptr Pavan Carpenter and Ptr Sunil Shashtri.  Major Sanjay Lochub was a valiant soldier and a competent pilot, who laid down his life in the service of the nation.