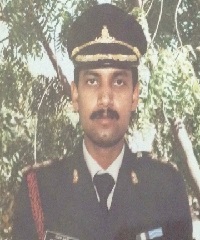 Major Sanjay Baduni was born on 21st January 1962 in Dehradun. Maj Baduni was the grandson of a freedom fighter and nationalism was in his blood. Right from his childhood Maj Baduni was passionate about Armed Forces and had a dream to don military uniform. His dream came true when he got selected to join the Army and passed out of the prestigious  IMA in 1985.

Maj Baduni got commissioned into the Regiment of Artillery and fell in love with his job. He was a proud gunner, as soldiers from Artillery are called and a committed soldier. Everyone who knew him, remembers him as a gentle soul and a caring human being. Maj Baduni had a heart of gold, full of love and was always ready to help others.By 1995, Maj Baduni had put in around ten years of service and had served in various field areas with challenging terrain and operational conditions. After serving for few years with his parent unit, he was later deputed to serve with 25 RR battalion deployed in J&K.

During 1995, Maj Sanjay Baduni was serving with 25 Rashtriya Rifles battalion, deployed in J&K for anti-terrorist operations. His unit was deployed in Doda sector which was a terrorist-infested area with challenging situations arising on a daily basis. On 24th August 1995, his unit had received credible information from intelligence sources about the presence of terrorists in Dhara village in their area of responsibility. A decision was taken to launch a search and destroy operation to take on the terrorists under the leadership of Maj Baduni.

Maj Baduni swung into action and launched the operation in Dhara village to bust the terrorist hideout. He along with his troops cordoned off the suspected area and got ready to implement their operational plan. The terrorists were hiding in a house to take the cover of civilians. Maj Baduni decided against blowing up the house as there were 2 small children inside. On being challenged, one terrorist tried escaping from the back door and was noticed by Maj Baduni. Maj Baduni chased him and fired at him while on the run. However during the exchange of fire, Maj Baduni got hit by bullets on his foot & neck.

Maj Baduni later succumbed to his injuries and was martyred displaying bravery and leadership of very high order. This brave soldier made the supreme sacrifice protecting his motherland, cherishing his dream to go wrapped in a Tri-Colour. Maj Sanjay Baduni is survived by his wife Smt Kamal Baduni and two daughters, Snigdha and Kanishka.

In my family, 21 Jan was always a day full of celebrations, Pooja and feasting till 1995, as it was Sanjay’s birthday. After 1995, this day is a quite & sad day. At times people don’t even speak about it and maintain an awkward silence. But to me, this day is still a special day. It may be surprising to know that I along with my daughters still celebrate our wedding anniversary on 14th Jan & my husband’s birthday on 21st Jan. On our 25th Wedding anniversary in 2015, my daughters & my sisters-in-law brought a cake and we celebrated the day with music & dance.

To many it might not make sense but to me Sanjay’s memories matter & will remain with me forever. I make sure that I make some donation on these days. My take on life is very different, as I believe in celebrating people & their memories. On my insistence, my youngest sister-in-law, Preeti still sends Rakhee for me on Raksha Bandhan. I believe in preserving relationships and celebrating each and every person who connects with me. This is not understood by many, but I surround myself with happiness and positivity. I have had many tough years after Sanjay’s martyrdom and learnt that if you want to live life, you only need to make a choice for yourself. My old parents & in-laws keep looking at our faces and I always try to wear a smile for them.

Ours was an arranged marriage, both my father & father-in-law were very good friends and it was like ‘Dosti rishte main badal gaye’. I being a Mumbai girl had no knowledge of defence services and their lives, so when we got engaged I was not sure of my decision. After few meetings, I fell in love with him for his simplicity, genuineness and caring attitude. I got ready to leave my budding career of a software programmer and rosy city life for him. He was such a doting husband that everyone around us refused to believe that ours was not a love marriage. Whenever anyone asked about our marriage, he would say that it was an arranged engagement and a love marriage. We were married for five and half years with our own share of sweet and sour journey with courses, postings, friends and two lovely daughters. Sanjay played every role wonderfully as he was a loving son, a caring brother, a doting husband, a protective father & a true gunner.

He came for his last leave on 20th May 1995 and made sure he stays for my birthday on 4th June. One day during that time when he was ironing his uniform, his mother said that she did not like it as it kept her son away from her. A die hard soldier at heart, Sanjay was very upset and explained the value of that olive green uniform to his mother, who had temporarily got carried away by the love for her son. He had a lot of compassion for the people in the Kashmir valley specially the children. He attained Martyrdom on 24th August 1995 during a fierce gun-battle in a counter insurgency operation in J & K.

Life after Sanjay was not easy. It’s been 22 & half years but to me and my daughters he is still present with us. I always feel that he is on a field posting without any leaves. Whenever I am challenged with difficult situation, there is an angel coming to rescue. That’s the time I look up and try to find my guiding star, my beloved husband, Major Sanjay Baduni.

Tribute by his daughter Snigdha Baduni :

I was only three years old when my father made the supreme sacrifice for our nation. Though I was too young that time to have distinct memories of him, but my mother and other family members ensured that my sister and I grow up knowing who our father was. My father was a brave and committed soldier but was a wonderful human being too. He was a perfect family man who truly cared for his wife and two little daughters.

During his last counter-insurgency operation when he attained martyrdom, he decided against blowing up a house to save two young children, who he believed could have been his own daughters. My father, at the cost of his life upheld the values; an Indian soldier always stands for. I remember being my daddy’s girl, though he was physically present only for the first three years of my life. I have grown up believing that he is always looking down on his little girls, ensuring that we meet all our goals and overcome all challenges. He is our guardian angel and we couldn’t be more proud to call ourselves “Daughters of a Martyr”. He has always been our guiding light and a source of strength and continues to live in his family— through his mother’s stories, wife’s eyes and daughters’ smiles!

Today as we commemorate my father’s birth anniversary, I salute not only brave soldiers like him, but also their equally brave families, who through their personal loss have contributed in protecting the honour of our country.