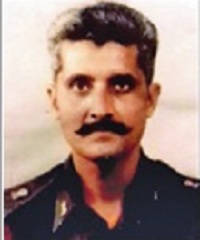 Major Samir ul Islam hailed from Lucknow in Uttar Pradesh and was born on 01 Oct 1964. Son of Shri Zameer Ul Islam and Smt Zakia, Maj Samir was the youngest of their three children. His father was Chief-Engineer of irrigation department in UP and the family lived in Gomti Nagar, Lucknow. He was commissioned into 17 Fd Regt of the Regiment of Artillery, the combat arm of Indian Army well known for its field guns, howitzers and other heavy weapons. After serving for few years, he got married to Ms Fauzia and the couple had a son Yusuf and daughter Seher.

In July 2001, Maj Samir was serving with 17 Para Field Regiment deployed in the northeast. On 03 July 2001, the unit had received specific information about the presence of militants in their area of operation. 35-year-old Major Samir was tasked to lead the operation against the ultras who were hiding in a house in Halflong area in Cachar district of Assam.

Maj Samir, leading from the front, took charge of the operation and cordoned off the area to engage them.  A fierce gun-battle followed which confirmed the presence of ultras. During the exchange of fire, Maj Samir received gunshot injuries in chest, shoulder and stomach but managed to kill three ultras before collapsing due to heavy bleeding and injury. He was rushed to the nearest army hospital but could not survive and succumbed to his injuries. Maj Samir Ul Islam was a valiant soldier and gritty officer who led from the front and laid down his life in the line of his duty. Maj Samir Ul Islam was given the gallantry award,  “Shaurya Chakra” for his outstanding bravery, leadership, camaraderie and supreme sacrifice during the operation.

The Citation for Shaurya Chakra awarded to him reads:

On Jul 3 2001, IC 46703 Major Samir Ul Islam of 17 Para fd Regt Major Samir had received information that ultras were hiding in a house in Halflong area In Cachar distt. Maj Samir, as battery commander, led his men and cordoned off the area and in the ensuing gun battle with the ultras made the supreme sacrifice and raised the head of his family, community and country with pride. He received gun shot injuries in chest, shoulder and stomach but managed to kill three ultras before collapsing due to heavy bleeding and injury. He was rushed to the nearest army hospital but was declared ‘brought dead’. Major Samir Ul Islam made the supreme sacrifice while fighting ultras in North East on 3 July 2001.

For his bravery and supreme sacrifice he was awarded Shaurya Chakra (posthumously).

Major Samir was so dear,
Even after sixteen years, he is still near.
He laid his life for India with loyalty,
Reminding all, of our morality.
Most men are mortal, but he is not,
With his Shaurya Chakra, he’s in our thoughts.
Terrorism and extremism are like a flood,
He tried to smash them with his blood.
So proud to be his brother!
Long live 17 Paras and Artillery Regiment!
Daniyal Islam