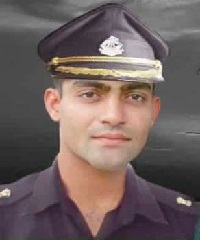 Maj Rushikesh Ramani was born on 8th October 1983 and was the only son of Gujarat-based Sri Vallabhbhai Ramani and Smt Geetaben Ramani. Right from his childhood Maj Rushikesh was very close to his parents and had deep respect for Indian culture. Maj Ramani completed his primary and high school education from Balachadi Sainik School located near Jamnagar in Gujarat from 1995 to 2001. He secured 85% in his class XII examination and was known for his brilliant academic record in the school. During his school days, he also functioned as a school captain and had a special interest in adventurous games.

After completing of his schooling he chose a career in Indian Armed Forces as he always wanted to serve in the army since his childhood. He joined the National Defense Academy at Pune and then IMA Dehradun in 2004. On 11th June 2005  Maj Rushikeh Ramani was commissioned into 23 Punjab of the Punjab Regiment, a regiment known for its fearless soldiers and numerous battle honours. With in short span of time the young Lt Ramani was chosen for the Special Operation Task Force for his boldness and daring leadership. He was soon promoted to the rank of Major while serving in the field area of J & K.

During March 2009, Maj Ramani’s unit was deployed in Kupwara district of Jammu and Kashmir for counter-insurgency operations. His unit was operating very close to the ‘Line of Control’ in an area that was very prone to infiltration by the militants from across the border. The unit troops were engaged in close monitoring of infiltration routes and had to maintain a very strict vigil through armed patrols all the time. Maj Ramani was functioning as a company commander of his unit and was engaged in counter-insurgency operations on a regular basis. Based on reports from intelligence sources, Maj Ramani was tasked to detect and prevent infiltration from across the border on 07 June 2009. After analyzing the available inputs, Maj Ramani immediately prepared a plan to deploy his troops in search and ambush operation in the area.

Towards midnight of 06-07 Jun 09, Major RV Ramani noticed a group of 5 terrorists moving stealthily near Gulab Post 3 Kms inside the ‘Line of Control’. On 07 June 2009, at about 1:15 AM, Major Ramani was able to establish contact with an infiltrating group of terrorists who fired at the troops on being challenged. Showing extreme alertness and presence of mind, Major RV Ramani immediately reorganized his search and ambush party to take on all the terrorists together in the killing zone. A fierce gun battle ensued thereafter and the terrorists tried to escape using the cover of the dense forest. Due to heavy rains and adverse weather conditions, eye contact with the remaining troops got broken and Maj Ramani had to face the entire group of militants alone with his Jawan (buddy- pair).

During the heavy exchange of fire, Maj Ramani received a burst of 12 bullets in his chest and abdomen. Despite the serious bullet injuries, Maj Ramani with total disregard to his personal safety or well being, continued to fire at the terrorists. Till such time the reinforcements arrived, Major RV Ramani led his men from the front and in spite of bleeding profusely shot dead three terrorists. Subsequently, Maj Ramani succumbed to his injuries and was martyred.

During the entire operation, Maj Ramani displayed exceptional courage, devotion to duty, leadership and bravery of the highest order in the face of the enemy. With this selfless and heroic act of conspicuous bravery, Maj Ramani single-handedly foiled and successfully prevented the infiltration attempt by Pakistani terrorists. Maj Rushikesh Ramani was given the gallantry award, “Sena Medal” posthumously for his outstanding bravery, unfaltering leadership and supreme sacrifice.

A Trust called, ” Major Rushikesh Ramani Memorial Trust” has been formed by the family of Maj Ramani in his honour at Ahmedabad. The stated objectives of the Trust are: