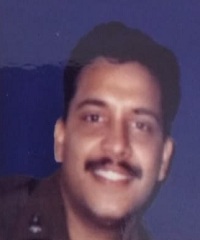 Major Ritesh Sharma was born on 27th October 1973 in Aligarh town of Uttar Pradesh. He completed his primary education from Badayun and Bareilly in Uttar Pradesh. Maj Ritesh Sharma had an inclination towards the Armed Forces and nursed the idea of joining the Army since his childhood. After his primary education, he completed his Intermediate from the reputed La Martiniere College, Lucknow and thereafter graduated in commerce stream from BHU, Varanasi. After graduation, he continued pursuing his dream and got selected to join the Army through Combined Defence Services Examination. He joined the prestigious IMA Dehradun in 1994 and passed out as an officer in 1995. He got commissioned into 17 Jat of the famed Jat Regiment, a Regiment known for its intrepid soldiers and numerous battle honours.

After commissioning as a lieutenant, he got posted to his unit deployed in Sri Ganganagar in Rajasthan where he honed his field-craft skills and also completed the commando training. Thereafter his unit got deployed in J & K for counter-insurgency operations. In the year 1999, when the Pakistani intrusion was detected along the LOC, his unit got redeployed and took on the responsibility of undertaking offensive operations right from the initial stages of the Kargil war. By that time he also had got promoted to the rank of Major.

During Kargil War, Maj Ritesh Sharma was commanding a company of his battalion, 17 Jat. The unit’s first major operation involved securing Pt. 4875, a strategic mountain peak on the western side of Tiger Hill which was occupied by Pakistani infiltrators. Due to its strategic location, securing Pt. 4875 was a top priority for the Indian Army. The peak, which stood at 15,990 feet above sea level, had extremely steep slopes. The eviction of Pakistani regulars from Pt 4875 in Kargil was crucial if Tiger Hill had to be recaptured. During the initial phase of the attack on Point 4875 (now Batra Top), Maj Ritesh Sharma got injured on 07 July 1999 but within 10 days he joined the unit back to take part in ongoing operations.

Maj Ritesh Sharma thereafter took part in the unit’s operations and successfully captured crucial positions in Pimple 1 & 2 and Mushkoh valley. Though the Kargil war ended on 26 July 1999, the border skirmishes and infiltration were continuing and consequently, the troops had to maintain a high state of alert at all times. Based on the intelligence reports about the presence of terrorists in Kupwara sector, Maj Ritesh Sharma’s unit decided to launch a search and destroy mission on 25 Sep 1999. The assault team along with Maj Ritesh Sharma reached the suspected area and launched the search operation. Soon the troops made contact with the suspected terrorists who fired at them on being challenged. A fierce gun battle ensued thereafter with a heavy exchange of fire from both sides.

Maj Ritesh Sharma and his soldiers displaying commendable courage and field craft skills managed to eliminate four terrorists. However, during the exchange of fire, Maj Ritesh Sharma got hit by a bullet and fell into a 200-meter gorge. He was shifted to the Military hospital in Udhampur but his condition worsened and he slipped into a coma. Maj Ritesh Sharma’s medical condition deteriorated further and he succumbed to his injuries on 06 Oct 1999. Maj Ritesh Sharma was a valiant soldier and a fine officer who laid down his life in the service of the nation.

Major Ritesh Sharma of 17 Jat had cut short his leave to be on the war front. He was the company commander in the attack on a prominent peak, Pimple 2, in July 1999. During the assault, he was injured heavily and had to be left behind, but only after he ensured that his second in command, Anuj Nayyar, was in a position to lead the battalion to victory. Captain Nayyar lost his life in this battle, and Major Sharma passed away a few months later, but in the interim period, he spent every waking hour at war trying to avenge his friend’s death. Following the capture of Pimple 2, he wrote this moving letter to his parents :

The news is that I am perfectly fine here and you do not have to be worried about me in mind constantly. When we spoke on the call yesterday you seemed scared. By the time this letter reaches you, the fight might have ended. We defeated the Pakistani 12 NLI Bn badly. The final blow to the enemy was given on Pimple 2 by my Charlie C Coy. A splinter went through my right heel near the artillery shelling. It did not touch any bone and so I am alright. It was good that it went through my foot or I would have had to go through an operation. Your courageous son did not return till he got all the other injured soldiers from the artillery shelling, gave them first aid and sent them back. I could not save the life of one of them, but I saved a dozen other injured ones. Only when my CO ordered me to come back and I was assured that Anuj would lead us to victory had I retired. But sadly, four hours after I left, Anuj had attained martyrdom. After this massive fight, the enemy knew where he stood and decided that backing off was the wisest thing he could do. You might have imagined the extent to which our army has made the nation and world proud through this victory by looking at the news coverage on Star News or India Today. It was only because of your blessings that were with me that an artillery shell blasted near me but I escaped. Please don’t be more afraid after reading all of this. The fight is already over and our posting is out for Lucknow and we all will soon complete our 2 years and be back. Given the public hysteria that is developing, people will soon forget the soldiers again. When there was a victory – the cavalier claimed it outright, the gunner boasted of his caliber, the signalmen and engineers published their worth, but the INFANTRY MAN stood silently with the victory under his feet.