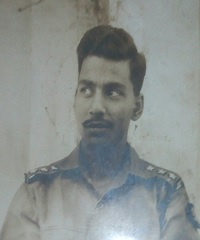 Maj Rishi Dev Vatsa was born on 04th May 1942 in Hoshiarpur district of Punjab. Son of Shri Jitendra Nath, Maj Vatsa was the youngest among five siblings to his parents. Maj Vatsa’s other brothers included C K Vatsa, B K Vatsa, R C Vatsa, and S P Vatsa. He did his schooling from Dav High School Hoshiarpur and completed Matric in the year 1957. Thereafter he completed his  FSC (intermediate Science Faculty) from Punjab University College, Hoshiarpur. He was a bright child during his school and also took a keen interest in sports and other extra-curricular activities. He was the member of Pen Friends Society and First Aid Unit in the Punjab University College Hoshiarpur.

After completing his education he joined the army and was commissioned into 3 Jat of the Jat Regiment, an infantry regiment well known for its intrepid soldiers and numerous battle honors. After being commissioned as 2nd Lieutenant he joined his unit in Sikkim in Dec 1962. When the war with Pakistan broke out in 1965, the unit got deployed in the western sector as a part of 54 Infantry Brigade. The unit took part in the historic battle of Dograi and fought one of the toughest battles of the war.

After Pakistan Launched operation Grand Slan aimed at occupying the important town of Aknoor in J & K, Indian Army decided to shift the theater of war to Pakistan’s Punjab area. The intended aim was to attack from the west so that the enemy would be forced to relocate troops engaged in the Aknoor operation to defend Punjab. This move planned by 54 Infantry Brigade using 15 Dogra, 13 Punjab, C squadron of 14 Horse and 3 Jat, proved to be the turning point of the war. 3 Jat under the command of Lt Col Desmond Hayde was the first to cross the international border on 06 Sep 1965. The two companies of 3 Jat captured the hamlet of Dograi by midday in a surprise and daring attack. However, due to inadequate follow-on support and air cover, the companies had to withdraw and move back to Santpura 9 km away from Dograi. The unit had to wait another fifteen days at Santpura to launch the second attack on Dograi on the night of 21/22 Sep 1965. Maj RD Vatsa was commanding one the rifle companies of the battalion and along with his troops, he used these fifteen days in preparing for the second attack on Dograi.

54 Infantry Brigade planned the attack in two phases. The 13 Punjab was told to overrun enemy defenses east of Dograi and secure mile 13 on Grand Trunk road in the first phase/ Once 13 mile was secured 3 Jat was to attack Dograi in the second phase. Mile 13 could not be secured but 3 Jat pressed on with the attack. The attack was launched at 01. 40 am on 22nd Sep with all companies of the battalion attacking simultaneously. It was a daring attack and every soldier who fought in Dograi that night appeared possessed. Dograi was captured by 3 am though sporadic firing continued. The CO of the battalion Lt Col Hayde met Maj Vatsa at 0330 hrs to congratulate him for the hard-earned victory.  However, the enemy was rattled by the loss of Dograi and launched a strong counterattack at 0630 hrs. During this attack, Maj Vatsa was hit directly by shell weighing 200 pounds and was martyred.

Maj RD Vatsa within two and half years of his short service had developed into a dedicated and battle-hardened soldier with field craft skills of a very high order. Displaying outstanding courage, determination and fighting spirit he laid down his life at the age of 23 years in the service of the nation following the highest traditions of the Indian Army.

Major R. D. Vatsa, was my uncle, younger brother of my daddy(sh. S.P. Vatsa). I was born almost a year after the martyrdom of chachaji. Right from my childhood, I had been hearing episodes, relating to chachaji from my daddy. My daddy used to show me and my brother, Honey, photos/certificates of chachaji from his well-kept file. While narrating the episodes and showing pics, he invariably used to get emotional. A couple of episodes:

1: While leaving for the battlefield, after the cancellation of leave of army personnel in 1965 from Hoshiarpur(East Punjab) chachaji had fed grapes to his mother, with his own hands and touched her feet to get her blessings. While leaving the home, chachaji said to his mother, “Mataji, if something untoward happens the letter will come at Hoshiarpur”. And this actually happened when the telegram intimating about his martyrdom was received at Hoshiarpur.

2: As a tiny tot, my chachaji used to accompany his mother, almost every time, whenever, she used to leave for social obligations or religious functions in the neighbourhood. Chachaji was so attached to his mother that he used to be called, in the mohalla, “Mataji’s Poonch(tail)”.

Major R D Vatsa, my Chachaji, left too early in the prime of his life. I salute to his sacrifice for our country and all other soldiers who have fallen in the line of duty. I am very proud to belong to the family of Major R D Vatsa.

My younger brother, Rishi Dev Vatsa, had come on leave, to Hoshiarpur, (East Punjab) to meet parents, in 1965. During his stay with the parents, leaves of Army personnel were canceled and they were asked to report to their respective units. Rishi Dev lost no time to get ready to report to his unit. Before leaving his home, Rishi Dev fed his mother, grapes with his own hands and also said that if something extraordinary happened, the intimation would come at Hoshiarpur address and that was what actually happened.

He left for duty and never came back again. He was given field promotion to the rank of Major after the casualty of Major Asa Ram Tyagi. The inland letter sent to him by the family to c/o 56 APO, congratulating him for the promotion was received back undelivered, with the words written on the face of the letter(killed in action on 22nd). His end was instantaneous. The exact age of Major R D Vatsa, on the day of his martyrdom, was 23 years, 4 months and 18 days.

My younger brother was the brightest star of the Vatsa Family. We pay our respectful tribute to him. We salute to his fighting spirit and pay respectful homage to all warriors, who fell in the line of duty, in the six wars since independence.

We bow our heads in silence to cherish his memory.