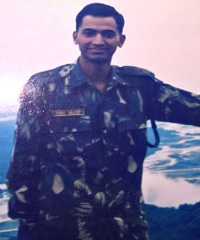 Major Ravi Vaish hailed from Lucknow in Uttar Pradesh and was born on 31 Dec 1978. Eldest among the three siblings, Maj Ravi passed his 12th standard in Jubilee Inter College and graduation in commerce stream from Lucknow University. He passed his Combined Defence Services Examination in 1999 and joined the Indian Military Academy Dehradun. He got commissioned as an infantry officer into 5 Gorkha Rifles Regiment, a regiment known for its intrepid soldiers and various battle honours.

After serving for few years with his unit in Arunachal Pradesh and Lucknow, Maj Ravi was later deputed to serve with 1 Assam Rifles deployed in the North East for counter insurgency operations. He was very popular among his friends and relatives owing to his affable nature and genuine concern for them. With in few years of his service, Maj Ravi had evolved into a committed soldier and a fine officer, who commanded respect of his juniors and peers as well.

During 2007, Maj Ravi’s unit 1 Assam Rifles was deployed in Ukhrul district of Manipur and was undertaking operations against the militants  engaged in anti-national activities in the north east. On 31 Oct 2007, Maj Ravi was leading a convoy with 25 soldiers and truck load of ammunition which had set off from the base camp located in Sorde. The convoy was heading to an outpost at Kasong falling in Phungyar, a hilly and heavily forested area in Ukhrul district of Manipur. The area was known to have poor visibility conditions  most of the times owing to the thick vegetation of the dense forest. However before the convoy could reach the outpost a group of heavily armed militants made a surprise attack on the convoy taking advantage of the poor visibility conditions and thick vegetation.

Maj Ravi and his troops though taken aback by the surprise attack swung into action and retaliated to give a befitting reply. A fierce gun battle ensued thereafter however during the heavy exchange of fire Maj Ravi and his two soldiers Hav Gyaneshwar Prasad and Rifleman H Sahinti got seriously injured. They later succumbed to their injuries and were martyred. During the operation, Maj Ravi, using his field craft skills led from the front like a true leader and laid down his life in the service of the nation at the age of 28 years.