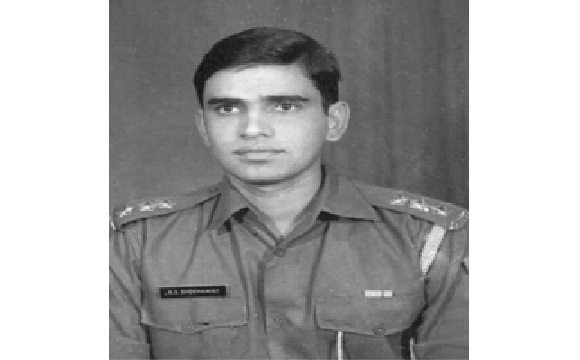 Major Ranvir Singh Shekhawat hailed from Jhunjhunu district of Rajasthan and  was born on 10th Jul 1945. Son of Shri Panne Singh Shekhawat and Smt Sireh Kanwar, he completed his primary schooling from Jaipur and went on to do his higher studies from BITS  Pilani. He later got selected to join the Army and joined the prestigious IMA at Dehradun. He was commissioned on 16 Dec 1967 at the age of 22 years. He got commissioned in to 4 Sikh battalion of the Sikh Regiment, an infantry regiment known for its dauntless soldiers and numerous battle honours. Later when 21st battalion of the Sikh Regiment was raised, he joined it and became part of the newly raised battalion.

After serving for few years, he got married to Ms Pushpa Kanwar, daughter of Shri Hem Singh Rathore from Churu district of Rajasthan on 20 Nov 1970. The couple was blessed with 2 daughters Vaishali (Born on 12 May 1972) and Bhavna (Born on 13 Nov 1976).

During Feb 1982, Maj Ranvir Singh Shekhawat's unit 21 Sikh was deployed in Manipur. At that time a number of insurgents belonging to NSCN-IM (National Socialist Council of Nagaland) one of the factions of NSCN led by Isak Chishi Swu, were active in the AOR (area of responsibility) of the unit. The troops had to maintain a very high state of alert at all times and be ready for any eventuality. On the 19th February 1982, Maj Ranvir Singh Shekhawat was detailed to lead a convey of 3 vehicles carrying men and ration from Imphal to Ukhrul.

At about 1000 hrs the convey, while negotiating a bend at Namthilok about 34 Kms from Imphal, was fired upon by the insurgents. The insurgents were heavily armed and had chosen a vantage point to ambush the convoy in a well planned move. As Maj Shekhawat was leading the convoy, he had to bear the brunt of the attack. However undeterred, with complete disregard to his personal safety, he jumped out of the vehicle and engaged the insurgents. As the attack was very sudden, Maj Shekhawat's soldiers did not get adequate time to react resulting in large number of casualties. Sensing the gravity of the situation, Maj Shekhawat continued to engage the insurgents single handedly till he received gun shot in his chest and was mortally wounded. He succumbed to his injuries clinging to his weapon and was martyred. Maj Ranvir Singh Shekhawat was a gallant soldier and gritty officer, who led from the front and laid down his life in the line of his duty. Maj Ranvir Singh Shekhawat was awarded “Shaurya Chakra” posthumously or his outstanding bravery, indomitable fighting spirit and supreme sacrifice.

On the 19th February 1982, Major Ranvir Singh Shekhawat was detailed to lead a convey of 3 vehicles carrying men and ration from Imphal to Ukhrul. At about 1000 hrs the convey, while negotiating a bend, was fired upon by hostiles in a well planned ambush. The intensity of their fire was so severe that the front vehicle in which he was travelling was immobilized. Major Ranvir Singh Shekhawat with complete disregard to his personal safety, jumped out of the vehicle and returned the fire of the hostiles rallying his men. Finding most of his men killed or seriously injured he continued single handedly in engaging the hostiles till he was mortally wounded by being hit in his chest. Despite this, Major Ranvir Singh Shekhawat, clung to his weapon till his death and prevented the hostiles from taking it away.