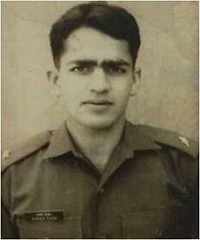 Major Raman Dada hailed from Jalandhar in Punjab and nursed the idea of joining the Armed Forces since his childhood. Maj Raman Dada completed his schooling from Apee Jay School in Jalandhar and thereafter pursued his bachelor’s degree in commerce from DAV College, Jalandhar. Son of Mr. Ravi Dada, a prominent businessman in Jalandhar, Maj Raman Dada was not interested in the family business and wanted to become an Army officer.

He followed his dream and joined the Army in the year 1991. He was commissioned into 11 Sikh of the famed Sikh Regiment, a regiment known for its valiant soldiers and rich history of battle honours. Maj Raman Dada got married to Anjani, daughter of an Army veteran Colonel H.S. Dogra, whose son Capt Rajesh Dogra, was martyred in the Poonch sector in Jammu and Kashmir.

During 1999, Maj Raman Dada’s unit was deployed in Assam under 21 Mountain Division. He joined the unit on 01 April 1999 and got involved in the ongoing Operation Rhino. On 01 May 1999, the security forces received information from the intelligence sources about the presence of some hardcore militants belonging to the National Democratic Front of Bodoland (NDFB) in Biswanath Chariali reserve forest area in central Assam’s Sonitar district. A decision was taken to launch an operation to flush out the militants under the leadership of Maj Raman Dada.

The assault team led by Maj Raman Dada set out for the assigned task and cordoned off the suspected area in the forest. The task was challenging as the area was mountainous and covered with thick vegetation as well.  As the troops approached the hideout, the militants opened fire at them and a gun battle ensued thereafter. Maj Raman Dada and his troops retaliated and in a courageous action killed few militants. Subsequently, Maj Raman Dada had to engage another militant in hand-to-hand combat.  Maj Dada managed to kill the militant but in the process, got wounded critically. Though bleeding profusely, he refused to be evacuated and shot dead another fleeing militant before succumbing to his injuries.

Thus in this act of outstanding bravery far beyond the call of duty, Maj Raman Dada led from the front and made the supreme sacrifice in the highest traditions of his Regiment. As a result of this gallant action by Maj Raman Dada, the troops eliminated all the seven dreaded militants of National Democratic Front of Bodoland (NDFB) and a large recovery of arms, ammunition and incriminating documents were made. Maj Raman Dada was given the nation’s second-highest peacetime gallantry award, “Kirti Chakra” for his exceptional courage, leadership and supreme sacrifice.

” We salute you our Hero, your supreme sacrifice will not go waste. Your name shall be written in golden letters in the history of the Sikh Regiment.”By: Commanding Officer ( 11 Sikh Battalion)