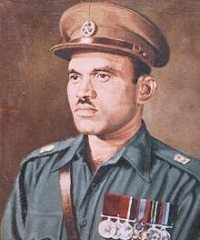 Major Rama Raghoba Rane was born on 26th June 1918 in Chendia village in Karwar district of Karnataka. Born in a Konkan Kshatriya Maratha community, Maj Rane had his education in different parts of the country as his father was in a transferable job. He joined the Army during the World War II at the age of 22 yrs and was commissioned into Bombay Sappers in July 1940.

Maj Rane as a young officer took part in the Burma war during World War II and then played a vital role in Indo-Pak war of 1947-48. He got married to Leela on 03 Feb 1955 and the couple had three sons and a daughter. He retired on 25 June 1968 after serving for 21 years in the Army and left for his heavenly abode on 11 July 1994 owing to natural causes. He proved his mettle as an outstanding soldier in Indo-Pak war and was given the nation’s highest gallantry award, “Param Vir Chakra” in 1948. Besides the coveted PVC, Maj Rane also got five “Mention-in-Dispatches” and a commendation by the Chief of Army Staff during his service career.

During 1948, Maj Rane, (then 2nd Lt) was serving with 37 Field Company of Bombay Sappers and was deployed in J & K. The Indo-Pak war which began in October 1947 had entered its seventh month by April 1948. The Pakistani soldiers and armed tribesmen had taken over Rajouri by the end of Mar 1948 and were creating havoc with their loot and killings. At that time 2nd Lt Rane’s unit was operating in Naushera sector and was given the task of clearing mines and roadblocks on the 26 miles road from Naushera to Rajouri. As it was imperative for the Armoured and Infantry forces to reach Rajouri at the earliest, the task given to 2nd Lt Rane’s unit was very crucial.

On 8th April, 2nd Lt Rane commenced his operation but his troops came under enemy mortar fire and had to use tanks as cover. However two of his soldiers got killed and five others got wounded including 2nd Lt Rane himself. 2nd Lt Rane was bleeding profusely but he continued with his mission after bandaging the wound . 2nd Lt Rane and his troops’s courageous action forced Pakistani soldiers to recede that day. On the next day morning fighting all the adversities 2nd Lt Rane and his men again got on to their arduous task. They kept clearing the routes till 9 PM in the night till the tanks could move forward. The road ahead was even more challenging as the big rocks near the river had to be blown up with dynamite to clear the route for the tanks. Finally, the armoured column could reach  Rajouri  on 12 Apr to begin operation to recapture Rajouri devastated by the enemy forces. This was made possible by the outstanding courage of 2nd Lt Rane and his men in the face of extreme challenges that demanded highest professional skills and devotion to duty.

2nd Lt Rane played a pivotal role in the recapture of Rajouri and saving its populace from further atrocities by the enemy forces. He was awarded “Param Vir Chakra” for his unparalleled courage, leadership and commitment.

On 8 April 1948, Second Lieutenant Ram Raghoba Rane, Bombay Engineers, was ordered to be in charge of the mine and roadblock clearing party at Mile 26 on the Naushera-Rajouri road which passes through very hilly country.

At 1100 hours, on that date near Nadpur South, just as Second Lieutenant Rane and his party were waiting near the tanks to start the work of clearing the mines ahead, the enemy started heavy mortaring of the area, with the result that two men of the mine-clearing party were killed and five others including Second Lieutenant Rane were wounded. The officer at once reorganized his party and started work for the tanks to go on to their position. Throughout the day he was near the tanks under heavy enemy machine-gun and mortar fire.

After the capture of Barwali Ridge at about 1630 hours, although knowing that the enemy had not been completely cleared of the area, Second Lieutenant Rane took his party ahead and started making a diversion for the tanks to proceed. He worked on till 2200 hours that night in full view of the enemy and under heavy machine-gun fire.

On 9 April he again started work at 0600 hours and worked on till 1500hrs when the diversion was ready for the tanks to proceed. As the armoured column advanced, he got into the leading carrier and proceeded ahead. After proceeding about half a mile he came across a roadblock made of pine trees. He at once dismounted and blasted the trees away. The advance continued. Another 300 yards and the same story was repeated. By this time it was getting on to 1700 hours. The road was curving round the hill like a snake. The next roadblock was a demolished culvert. Second Lieutenant Rane again got on with the job. Before he could start work, the enemy opened up with their machine-guns, but with super courage and leadership he made a diversion and the column proceeded ahead. The roadblocks were becoming numerous but he blasted his way through. It was now 1815 hours, and light was fading fast. The carrier came across a formidable roadblock of five big pine trees surrounded by mines and covered by machine-gun fire. He started removing the mines and was determined to clear the roadblock but the armoured column commander appreciating the situation got the column into a harbour area.

On 10 April 1948 at 0445 hours, Second Lieutenant Rane again started work on the roadblock in spite of machine-gun fire with the support of one troops of tanks. With sheer will power he cleared this roadblock by 0630hours. The next thousand yards was a mass of roadblocks and blasted embankments. That was not all. The enemy had the whole area covered with machine-gun fire but with superhuman efforts, in spite of having been wounded, with cool courage and exemplary leadership and complete disregard for personal life, he cleared the road by 1030 hours.