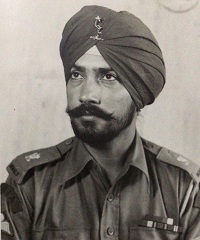 Maj Ram Singh was commissioned into the Corps of Signals considered to be the nervous system of the Indian army. With its motto, ” Teevrachaukas” meaning “Swift and Secure”, the Corps provides communication to all units and formations of the Indian army during peace & war. By the year-1962, Maj Ram Singh had substantial experience of working in various operational units and had developed into a professionally competent and respected Signals Officer.

7 Infantry Brigade suffered heavy casualties during its withdrawal to Dirang Dzong, but Maj Ram Singh continued to man the Brigade Signal Centre against all odds. Maj Ram Singh got severely injured during the continuous onslaught by the Chinese forces but did not leave the place of his duty before he finally succumbed to his injuries and was martyred. Maj Ram Singh was a committed soldier and a determined officer who set a fine example of leadership, professional competence, and devotion to duty. Maj Ram Singh was given the gallantry award, “Sena Medal” for his act of valour, resoluteness and supreme sacrifice.