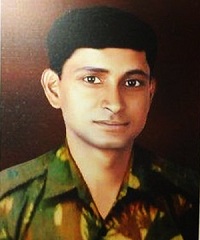 Major Rajesh Singh Adhikari was born on 25 Dec 1970 in Tallital in Nainital, a scenic hill spot in the state of Uttarakhand. He did his initial schooling from St. Joseph’s College, Nainital, middle school from Government Inter College and completed his graduation from Kumaon University in 1992. Maj Adhikari always wanted to be an army officer and his dream came true when he got selected to join the Indian Military Academy. He got commissioned into 2 Mech Inf battalion on 11 December 1993 at the age of 23 years. After serving for 5 years in various operational areas Maj Adhikari got married in 1998 to Ms Kiran Negi, and was to celebrate his first wedding anniversary on 09 June 1999.

During the Kargil war, Maj Adhikari’s unit was deployed in J & K and played a vital role in the initial phase of the war. During the war, Maj Adhikari received a letter from his wife, kiran when he was at Tololing at 16,000 feet. He stuffed it in his pocket saying,” I will read it in peace tomorrow after the operation is finished” , but unfortunately, he never got a chance to read that letter.

When heavy fighting broke out in the Kargil region of Jammu and Kashmir owing to planned infiltration by militants backed by the Pakistan army, the Indian Army was ordered to clear the heights of those intruders. The first major operation was undertaken by the soldiers who launched an offensive on Tololing to rid the area of intruders. The soldiers had been ordered to attack the enemy following the launch of Operation Vijay on May 25, after Lieutenant Saurabh Kalia, on patrol duty in the area, was declared missing.

On 30 May 1999, as a part of battalion operations to capture the Tololing feature, Maj Rajesh Singh Adhikari on attachment to 18 Grenadiers was tasked to secure the initial foothold by capturing its forward post where the enemy held a strongly fortified advance position. The post was located in a treacherous, mountainous terrain at about 15,000 feet and covered with snow. That night he and a 10-man Grenadiers team began climbing towards their fortified objective with picks and axes. Maj Adhikari was leading the central arm of three 10-man teams trying to capture a bunker. Maj Adhikari led the central charge, three metres ahead of his men. The bunker fell, but Maj Adhikari was shot, 20 m short of his objective. He was fired at from two mutually supporting bunkers with universal machine guns. He immediately directed the rocket launcher detachment to engage the bunker and without waiting, rushed into the bunker and killed two intruders in a close quarter combat.

Thereafter, he ordered his medium machine gun (MMG) detachment to fix position behind a rocky feature and engage the enemy. The assault party continued to inch their way up towards the objective. Despite suffering grievous bullet injuries, Maj Adhikari continued to give instructions to his men and direct fire. Refusing to be evacuated, he charged at the second bunker and killed one more occupant, thus capturing the second bunker at Tololing which later facilitated the capture of Point 4590. Maj Adhikari, had caused heavy casualties to the intruders and forced them to withdraw before succumbing to his injuries. The Battle of Tololing was one of the most significant battles, where Maj Adhikari fought valiantly and achieved the objective at the cost of his life. Maj Adhikari  was a gallant soldier and a gritty officer who led from the front and laid down his life in the line of his duty.

On 30 May 1999, as a part of battalion operation to capture the Tololing feature, Major Rajesh Singh Adhikari was tasked to secure the initial foothold by capturing its forward spur where the enemy held a strong position. The enemy position was located in a treacherous mountainous terrain covered with snow at a height of about 15,000 feet. While Major Adhikari was leading his company towards the objective, he was fired at from two mutually supporting enemy positions with Universal machine guns. The officer immediately directed the rocket launcher detachment to engage the enemy position and killed two enemy soldiers in close quarter combat. Thereafter, the officer, displaying presence of mind under heavy fire, ordered his medium machine gun detachment to take position behind a rocky feature and engage the enemy. The assault party continued to inch their way up. While so advancing forward, Major Adhikari suffered grievous bullet injuries, yet he continued to direct his sub-unit. Refusing to be evacuated, then he charged at the second enemy position and killed one more occupant, thus capturing the second position at Tololing which later facilitated capture of Point 4590. However later he succumbed to his injuries.

Major Rajesh Singh Adhikari displayed exceptional valour, outstanding leadership in the presence of the enemy and laid down his life in the highest traditions of the Indian Army.