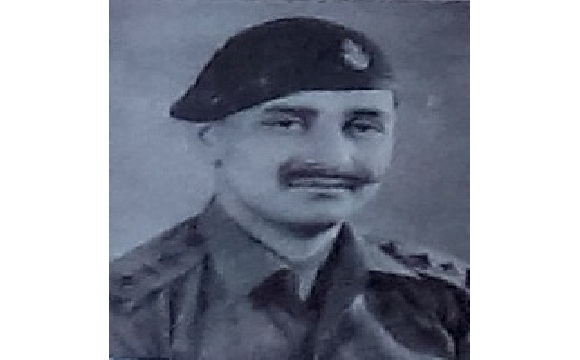 Major Rajender Singh Rajawat hailed from Kota district in Rajasthan was born on 04 October 1942. Son of Shri Shashi Kala Rajawat, Maj Rajender Singh Rajawat joined the Army on 30 June 1963 at the age of 21 years. He was commissioned into 18 Raj Rif of the famed Rajputana Rifles Regiment, an infantry Regiment known for its valiant soldiers and numerous battle honours. By the year 1971, he had put in around 8 years of service and had been promoted to the rank of Major. By that time, he had gathered substantial field experience and developed into a committed officer, commanding respect of his men under him and seniors as well.

During Indo- Pak 1971 war Maj Rajender Singh Rajawat's unit 18 Raj Rif was deployed on the western border. The unit was deployed in Shakargarh sector under the operational control of 10 Infantry Division. During that period Maj Rajender Singh Rajawat was functioning as a company commander of an Armoured Personnel carrier company of 18 Raj Rif battalion. On 08 Dec 1971,  Maj Rajawat's Company was assigned the task of capturing an enemy locality as part of ongoing operations in the Shakargarh sector. This position was very crucial and was held in strength by the enemy troops.

Maj Rajender Singh Rajawat along with his troops launched the attack as planned. The enemy resorted to heavy artillery shelling and gave stiff resistance. Maj Rajawat led his men courageously and eventually captured the objective after fierce hand to hand fighting. But soon the enemy launched a counter-attack, to regain the position. Maj Rajawat in a daring move, went from trench to trench encouraging his men to repulse the attack. However,while doing so, Maj Rajawat was hit by an enemy shell injuring him seriously. He later succumbed to his injuries and was martyred. Maj Rajender Singh Rajawat was a valiant soldier and gritty officer who led from the front and laid down his life in the line of his duty.

Major Rajender Singh Rajawat was commanding an Armoured Personnel carrier company of a Battalion of the Rajputana Rifles in the Shakargarh Sector. His company was assigned the task of capturing an enemy locality. This position held in strength by the enemy. Major Rajender Singh Rajawat led his men in the assault and cleared the built of area, in spite of heavy shelling and stiff resistance after fierce hand to hand fighting. When the enemy launched a counter-attack, he notwithstanding heavy enemy fire went from trench to trench encouraging his men to repulse the attack. In the process he was hit by an enemy shell as a result of which he died.

In this action, Major Rajender Singh Rajawat  displayed gallantry, determination and leadership of a high order.