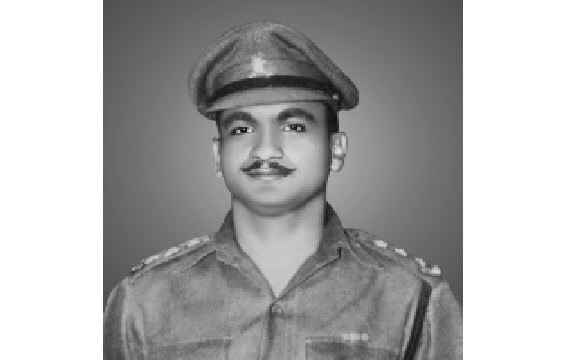 Major Raghunath Prasad Sharma was born on 10 Dec 1938 in his native village Ahrod in Haryana. Eldest of the 8 siblings, he was academically very bright right from his childhood. He completed his post graduation from Birla College, Pilani in Rajasthan. He then went on to join the Army at the age of 21 years and was commissioned on 13th December 1959 into 16 Madras of the famed Madras Regiment, a Regiment known for its valiant soldiers and numerous battle exploits.

As the Indo-China war broke out in 1962, Maj RP Sharma as a young lieutenant participated in operations in Ladakh region and honed his battle skills. He participated in another war in 1965 and was deployed on the western front in Rajasthan. During the war, he went behind enemy lines and survived for days under arduous conditions before he was finally rescued. He had suffered serious injuries and was brought to the Military Hospital in Pune where he recovered after getting treated for nearly 2 months.

Maj RP Sharma got married to Ms Geeta in 1964, and the couple had three daughters and a son. In 1966, he was appointed as ADC to the Governor of Andhra Pradesh, Sri Pattamthanu Pillai for 3 years. In 1971, another Indo-Pak war broke out and Maj RP Sharma once again set off along with his unit, 16 Madras to fight the war which turned out to be his last. Maj RP Sharma was a valiant soldier and an officer par excellence who always led from the front. He would often say to his wife, “Sher ban ke jiya hoon aur Sher ban ke rahunga.” He was a very fine poet too and wrote many poems for his wife and kids while deployed at the border.

During the 1971 Indo-Pak war, Maj RP Sharma’s unit was deployed in the Shakargarh sector on the western front. After his Commanding Officer, Lt Col Ved Prakash Ghai was martyred during the “Battle of Basantar”, Maj RP Sharma took over the command of his unit and continued to direct the operations. Though the war ended on 16 Dec 1971 after the surrender of Pakistani forces on the Eastern border, the border skirmishes were continuing on the western border. Shakargarh, Jaffarwal in the western sector was one such area where enemy was continuing operations to get into positions of advantage.

On 17 Dec 1971, during heavy artillery shelling by the enemy on positions held by 16 Madras, Maj RP Sharma got grievously injured in his leg, arm and neck. He was shifted to the Army Hospital, Delhi on 21st December 1971, where his left leg below the knee was amputated on 31st December 1971. But his condition worsened over the next few days and he was transferred to the Military Hospital in Bangalore on 8th January 1972. However, Maj RP Sharma succumbed to his injuries and was martyred on 09 Jan 1972. Maj RP Sharma was cremated with full military honours at Purana Pul, Hyderabad on 11th January 1972.

Dr. Bharti Sharma, Daughter of Major Raghunath Prasad Sharma paid tribute to her father on his “Day of Martyrdom” on 09 Jan 2021…..

War, the word that terrifies us, is an experience which has profound emotions of those who are maimed and sacrificed in the lust of war. Yet it has a selfless sense of purpose. I can have as many words in my life yet they are not enough to express even a fraction of emptiness left by his martyrdom and sacrifice in the “Battle of Basantar” during 1971 war.

I was merely an year old when this event changed our lives forever. There are no memories of him as a person yet his absence is with me forever. Unlike other victims of war, we along with our mother were lucky enough to be cared and raised by a loving family. As I imagine, “The willingness to die for another person is a form of love and is a profound and essential part of a Combat” – this seems to be the thought of every soldier including my father.

Hearing the tales of bravado and sacrifice from his veteran colleagues, I feel utmost pride and sorrow. His sacrifice has endowed upon us the pride and courage to lead and nurture our children towards a respectable life. In his death, the most grief lies with my mother who, as a young mother of four, has lived her life with his memories keeping a brave and proud face throughout. We will always be indebted to her in a way both of them have been a tale of sacrifice, love and inspiration for us.

Dedicated to my father and other fallen heroes.