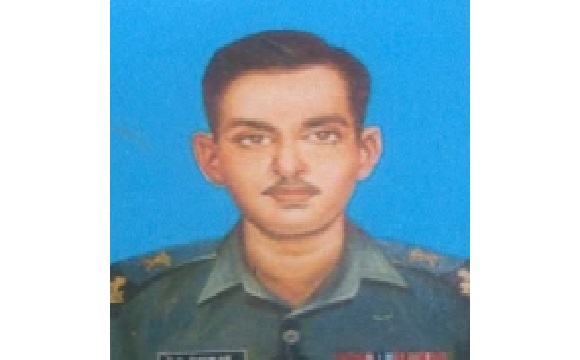 Major Ramesh Kumar Dadkar hailed from Maharashtra and was born on 20th Aug 1942. He studied from Ramnarain Ruia College of Science and Arts in Mumbai and later joined the Indian Army. He was commissioned into 22 MLI battalion of the Maratha Light Infantry Regiment, an infantry regiment well known for its gallant soldiers and a number of battle honours. After completing his training, he served in varous operational areas and developed into a fine officer with admirable leadership skills. By 1971, he had been promoted to the rank of Major and had gather substantial field experience. As the war clouds with Pakistan were gathering on the horizon, his unit 22 MLI got deployed on the eastern front.

During Indo- Pak 1971 war Maj RK Dadkar's unit 22 MLI was deployed in the Eastern Sector. The unit was deployed near Hilli a strategic border town of the erstwhile East Pakistan under the operational control of 202 Mountain Brigade. The Battle of Hilli, was one of the most decisive battles of 1971 and is considered to be one of the most ferocious battles ever fought by a gallant band of soldiers from highly motivated units. 202 Mountain Brigade functioning under operational control of 20 Mountain Division was tasked to capture Hilli in November 1971. The battle of Hilli turned out to be the most savagely fought battle in the Eastern sector. The battle of Hilli was fought over two phases; first from 22 Nov to 24 Nov and second phase from 10 Dec to 11 Dec 1971. Maj RK Dadkar's unit 22 MLI along with 8 Guards and 5 Garhwal were committed by 202 Mtn Bde for this battle with the support of Artillery and armour.

The main objective of the battle was to capture Bogra, thereby cutting off Pakistani forces in the North from the rest of East Pakistan. The best way of reaching Bogra was through Hilli. Maj Dadkar was commanding B Company of his battalion which got deployed on 25 Nov to defend a recently captured objective Morapara. Maj Dadkar's Company got deployed to face the enemy to the east and C Company under Maj Chandrasekharan facing north. A platoon of Maj RK Dadkar's Company was sent to a feature 500 yards away under Lt Tombing as a screen position. On 26 Nov, the enemy attacked the position held by Maj RK Dadkar's Company. In the attack one of the JCOs Naib Subedar Mohamad Ismail had his leg blown off after he stepped on an anti-personnel mine. Immediately Maj RK Dadkar, swung into action and without caring for his won safety went ahead to move the injured JCO to safety. However while doing so, he received a machine gun burst and got severely injured. Eventually he succumbed to his injuries and was martyred. Maj RK Dadkar was a gallant soldier and a gritty officer who led from the front and laid down his life in the line of his duty.

Major Ramesh Kumar Dadkar was commanding a company of Maratha Light Infantry in the Eastern Sector during the operations against Pakistan. When a Junior Commissioned Officer was injured in a mine blast Major Dadkar, along with a few stretcher-bearers, immediately rushed to his help notwithstanding intense enemy fire. When the JCO was being evacuated, one of the stretcher-bearers was fatally wounded in enemy fire. Undeterred, Major Dadkar continued his attempts to evacuate the JCO. In this process, an enemy machine gun burst hit him as a result of which he was killed.
In this action, Major Dadkar displayed commendable courage and determination.