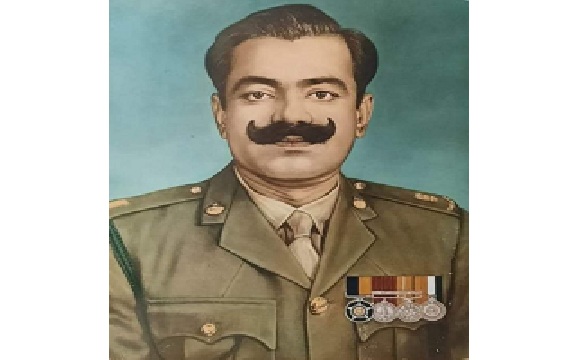 Major Puran Singh Rathore hailed from Manera village in Lunkaransar tehsil of Bikaner district in Rajasthan and was born on 04th July 1927. Son of Shri Kana Singh, Major Puran Singh lost his mother when he was barely two years old.  He joined the Walter Noble High School at the age of 6 years and later studied from King George Indian Military School Ajmer. After completing his schooling from Ajmer he joined the Bikaner Training Centre in 1945 as a cadet. Subsequently he joined the Indian Military Academy at Dehradun in the year 1946. He passed out from IMA in the year 1947 as a 2nd Lieutenant at the age of 20 years. He was commissioned into 13 Grenadiers battalion of the Grenadiers Regiment, an infantry Regiment known for its valiant soldiers and various battle honours.

After completing his training, he served in Jammu and Kashmir and took part in various operations. In the year 1952, he was serving with 16 Rajput battalion, when he was instrumental in apprehending around eight enemy spies. By the year 1964, he had put in around 17 years of service and had been promoted to the rank of Major. When the war clouds gathered on the horizon in 1965, Major Puran Singh's unit got deployed in Jaisalmer sector on the Rajasthan border.

During Oct/Nov 1965, Major Puran Singh's unit 13 Grenadiers was deployed in in Jaisalmer sector of Rajasthan and was manning the forward posts. Though the Indo Pak war of 1965, officially ended on 23 Sep 1965, border skirmishes were continuing thereafter to occupy positions of advantage. The Indian Army troops were maintaining a very high level of alert at all border posts to thwart any attempt of misadventure by enemy forces. 13 Grenadiers battalion besides manning the forward posts,  also launched armed patrols at regular intervals to monitor its AOR (area of Responsibility). On 31 Oct 1965, Major Puran Singh as Company Commander of 'C' company was leading one such patrol in Sadhewala sector in Jaisalmer.

Major Puran Singh Rathore was a brave soldier and gritty officer, who led from the front and laid down his life in the line of his duty.  Maj Puran Singh was awarded "Vir Chakra" for his outstanding valour, devotion to duty and supreme sacrifice.

Major Puran Singh was commanding a long-range border patrol in Rajasthan. During the early hours of 31st October 1965, he bumped into a strongly held and well dug-in position and some of his men were encircled by the enemy. Major Singh deployed his remaining men so that the enemy was almost encircled. When the enemy opened heavy fire, Major Singh led his men and returned the fire so effectively that the enemy abandoned the position. He was also instrumental in foiling three successive enemy attacks on another position. Subsequently, he was killed in an enemy ambush.

In the action, Major Puran Singh displayed exemplary courage and unflinching determination in the best tradition of the Army.